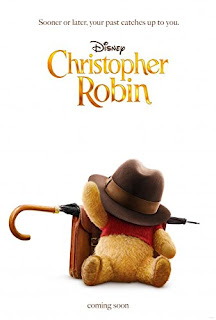 Taking a page from Hook (and the Paddington movies), this was Disney's live-action take on the Winnie The Pooh stories as we meet a grown-up Christopher Robin who gets a visit from Pooh himself while working in London when Piglet and the others seem to have disappeared.

Having left his home in the countryside for boarding school as a child, Christopher Robin (Ewan McGregor) went on to serve in WWI, get married and have a child. He now works for a somewhat struggling luggage company and is tasked by his (cartoonishly) stern boss with working throughout the week-end to try and find some form of financial solution or else most of his colleagues will be laid off. Meanwhile, Pooh wakes up to find that all his friends are gone. Luckily, he finds a gateway to a London park inside a tree and soon encounters Christopher Robin, turning his week-end and his life upside-down. Robin is made to revisit his childhood, reconnect with the friends he'd forgotten and ultimately find a better work-life balance. A. A. Milne and E. H. Shepard's classic characters are recreated using CGI: they look like soft toys and are voiced by the likes of Jim Cummings, Brad Garrett, Peter Capaldi, Nick Mohammed and Toby Jones.

There's something very familiar and cozy about this movie, which works both as its biggest asset and biggest flaw. On the one hand, Pooh and the gang are just as charming as you'd hope them to be and whenever they're on screen you do feel a good amount of nostalgia. While stop motion might have been a less cold option in terms of the visuals and the slapstick humour throughout is more awkward than anything else, the excellent voice acting and timeless character designs carry it through. On the other hand, there isn't anything ground-breaking or even all that new about this movie and it's quite derivative as, for each aspect of it, one could name another film that has done the same thing, often better. The plot itself lacks originality and relies solely on the bittersweetness that is growing up and, while the tragic nature of that goes a long way, you still feel like there was a more interesting and fresh story that could have been told here.

Like Tim Burton's Alice In Wonderland or Hook, this is a sequel to a live-action adaptation we've never seen and, as such, it suffers from similar issues, including a lack of attachment to the main character and a new visual style that takes some getting used to. That said, it's hard not to love Pooh and his friends and appreciate the way in which Christopher Robin rediscovers what he'd left behind.