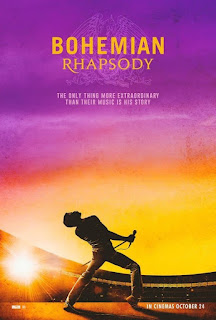 Several years in the making, Bohemian Rhapsody was finally released this week, surpassing expectations at the box-office and confirming it as one of the highest grossing music biopics of all time.

Rami Malek takes on the role of rock legend Freddie Mercury, a role that was previously filled by Sacha Baron Cohen who famously left an early version of this project years ago, following creative differences. Cohen's version of the film promised sex, drugs and rock and roll aplenty: an R-rated, no holds barred, honest look at the singer's rockstar life. After the remaining members of Queen and the studio started having second thoughts about this take on things, they set out to rebuild the movie the way they wanted, without taking any big risks. And so Bohemian Rhapsody was born: a mainstream-friendly, Queen-centric biopic that aims to tell the story of Freddie Mercury with a slight emphasis on the positive and toxic relationships he made along the way. Despite its financial success, the film has received criticism for sugarcoating the late singer's life and not sticking to true events. Indeed, a lot of liberties were taken with certain key aspects of Mercury's life for dramatic convenience and this is definitely disappointing since so many other biopics fall in the exact same trap.

On the plus side, this is a gorgeous-looking film that builds up to an impressive (if often inaccurate) recreation of the classic Live Aid concert in Wembley. The music throughout is, of course, irresistible and, in fact, there just isn't enough time in the film to include all of Queen's biggest hits, which is in itself a testament to the band's legacy. While it would have been interesting to see Baron Cohen in the lead, it's hard to deny that Rami Malek was a great casting choice: his Freddie Mercury is vulnerable yet powerful, lonely yet extravagant, awkward yet so talented it hurts. The casting in general is quite good in this film and there's an entertaining cameo by Mike Myers. By focusing on Mercury's relationship and then friendship with Mary Austin, the film touches upon a deep sadness that followed the singer over the years and could be felt through his songs. Unfortunately, the writing is far too uneven to convincingly elevate a film that mostly just wants to roughly celebrate a legendary singer's talent, play Queen songs and sell tickets.

There are glimpses of a great biopic throughout Bohemian Rhapsody but the rushed storytelling, often clumsy script and lack of honesty hurts an otherwise very entertaining and well made film with an excellent lead performance.