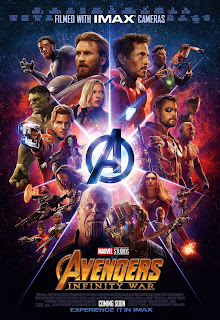 Marvel finally delivered its most ambitious project yet this year as an unprecedented gathering of comic-book superheroes faced one powerful enemy in Avengers: Infinity War, the third and most epic in scale of all the Avengers films.

If there's one thing Marvel has excelled at so far, it's build-ups. Whether it was slowly but surely leading us to that very first crossover, Captain America: Civil War or this inter-galactic adventure. Having everyone's favourite heroes facing Thanos (a mo-caped Josh Brolin) in a huge battle spanning at least two films was the plan ever since we first met the Avengers so seeing such a bold project come to fruition at last is quite an achievement in itself. Of course, making such a packed crossover not only make sense but having it be actually good was the real challenge. Luckily, juggling multiple characters isn't something that Marvel has had much trouble with so far and, indeed, Infinity War does have a story that (mostly) works and isn't too tough to follow. Unlike the first Avengers film, however, which required viewers to have only passing knowledge of each character, Infinity War demands familiarity with most prior movies and this might alienate those more casual of viewers who might have skipped one or two along the way. That said, there's plenty of exposition to make sure that, at the very least, everyone will know who Thanos is, what he's up to and why that matters.

The plot sees Thanos attempt to gather all the Infinity Stones which would give him the power to eradicate half of the universe effortlessly in order to, he believes, save life itself. He first encounters Thor (Chris Hemsworth) and what was left of the Asgardian people then sets his sights on Earth where he sends his team to recover two of the stones. Tony Stark (Robert Downey Jr.), with the help of Peter Parker (Tom Holland) and Dr. Strange (Benedict Cumberbatch) attempt to bring the fight to Thanos' home of Titan while Steve Rogers (Chris Evans), King T'Challa (Chadwick Boseman) and the rest of the Avengers try to destroy Vision's (Paul Bettany) stone without killing him as they battle alien creatures in Wakanda. Meanwhile, we follow Thor and the Guardians Of The Galaxy as the former tries to find a new Mjolnir-like weapon and the latter attempt to rescue Gamora (Zoe Saldana) from Thanos who needs her to find one of the stones. This is obviously a busy film and it does jump around quite a bit but it doesn't waste too much of its time, although Thor's entire quest and a handful of jokey back-and-forths do slow things down a tad.

There is a lot of fun to be had in Infinity War throughout: seeing Star-Lord (Chris Pratt), Rocket Raccoon (Bradley Cooper) and the rest of the Guardians interact with the likes of Thor and Tony Stark is a treat, there's plenty of humour thrown in (sometimes too much of it) and the action scenes are impressive. Comic-book fans should have a ball watching all these characters interact with each other, use their powers together and take down the toughest team of bad guys yet. The pacing could have been a bit more consistent as some of the side plots (Thor, Vision) can drag a bit and, even though the darker, apocalyptic tone set by a character like Thanos should clash with the playfulness of the heroes, one can't help but feel that some scenes should have been trimmed a bit to make the whole thing flow a little better and a lot less humour could have been shoe-horned in for the sake of tone. There are also so many characters to keep track of that some big names like Captain America or Hulk (Mark Ruffalo) don't really get much screen-time and others, like Ant-Man, Hawkeye and many more, are simply absent, though these loose ends may be explained in further instalments.

While previous Avengers films may have been little more than spectacle big on fan service and short on plot, Infinity War has some depth to it thanks to a genuine threat that finally challenges all the heroes to their very core. The intimidating Thanos doesn't disappoint in terms of what he puts the Avengers through, from the way in which he disposes of major characters in the very first scene to how he handles the people he supposedly cares about and, of course, the inevitably bleak third act. The film makes a point of showing us not just what Thanos wants and how far he's willing to go to get it but also who he is and what his motivations are. We despise yet understand him and he's the only character in the film to not crack jokes at inappropriate times so all this makes him one of the most consistent and well-defined villains in the MCU, as well as the most threatening by far. His alien henchmen are a lot more one-dimensional but they keep the Avengers busy while Thanos isn't around. Expect plenty of cool surprises, including after the credits, and while the ending is a downer, it should get you excited about the next film plus the arrival of new characters in solo outings.

Another massive gamble from Marvel pays off brilliantly as we are served another big, entertaining and well made blockbuster with a charming all-star ensemble cast, lots of action and one heck of a scale. The fan service, silly conversations and distracted structure might alienate non-comic book fans but those familiar with all the movies, at least, should have a great time with this one.