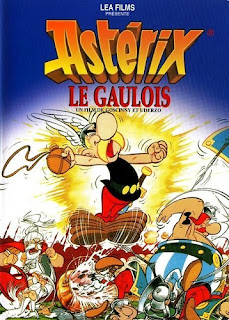 The first animated film based on René Goscinny and Albert Uderzo's iconic Astérix French comic-books, Astérix The Gaul was made in 1967 and was based on the first of the books. Roger Carel voiced Astérix while Jacques Morel voiced Obélix.

Set in an alternative version of history in which Julius Caesar managed to conquer all of France save for one small village where the Gauls have stayed safe thanks to a magic potion, the comics follow Astérix and Obélix, with their dog Dogmatix, on their adventures. This first film sees nearby Roman camp Petibonum send one of their most dim-witted soldiers disguised as a Gaul to Astérix's village in order to find out the source of their power. Caligula Minus, the spy in question, finds out the Gauls' secret and shows off the power of the magic potion to his superior Caius Bonus' camp. This prompts the Romans to kidnap the druid Getafix, who makes the potion, and it's then up to Astérix to find him and bring him back. This being the first story, it's mostly a showcase of how clever and fearless Astérix is as he single-handedly outsmarts the Romans using only his wits. Obélix isn't really a big part of this particular story but he pops up again with the rest of the village near the end.

The creators of Astérix were not satisfied with this movie, especially since they only found out about it once it was being screened for them. After this, they decided to be significantly involved in any further projects. Their disappointment was understandable as the film is infinitely more slight than the book and it only captures some of what makes these comics so loveable. The animation throughout is patchy and the voice acting is occasionally a bit off but, on the plus side, the film does have a lot of charm. The characters are instantly likeable, we're introduced to the most classic of Astérix themes, there are quite a few funny, memorable moments and you definitely recognize key aspects from the book. You do get the feeling, however, that the making of the film was perhaps a bit rushed and, had a lot more work and supervision gone into the project, it could have been a lot better. It doesn't make the best use of all the characters and, watching it now, it does feel quite dated.

This first Astérix movie may be a bit of a mixed bag but it's still an enjoyable little film and a decent enough place to start if you're not too familiar with the comics or the characters. This is a fun, if slightly clunky, animated film with enough good humour and charm to make it worth it.