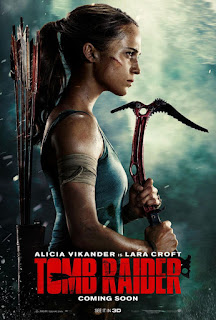 Based on the 2013 video game, Tomb Raider is Hollywood's latest attempt at bringing Lara Croft to the big screen. Alicia Vikander plays the iconic character in a prequel story that has Croft travel to a Skull Island-like location in order to find out what happened to her father, who is presumed dead.

Whenever anything is rebooted, it tends to divide fans quite a bit as some embrace the new take on their favourite character and others reject it entirely. The recent game gave Lara Croft a new look, a bow and arrow instead of her usual two guns as well as more of a backstory. Those hoping for a movie reboot to the Angelina Jolie-starring Lara Croft: Tomb Raider films, which were very much inspired by the older games, might have to wait a lot longer as this new movie aims to tell a modern and somewhat more grounded story. Vikander's Lara Croft is no witty super-spy or Indiana Jones-type explorer, she's a normal person who just happens to be very smart (when the plot demands it), who is capable of taking care of herself in a fight and who is nearly ready to accept her father's exorbitant inheritance. The film goes to great lengths to prove to us that Lara Croft isn't just some rich girl superhero who raids tombs for fun: the opening 20 minutes see Croft living on a modest budget in London working a job as a... renegade cyclist (?) and rejecting the wealth that's rightfully hers. It's all rather forced and unnecessary but, luckily, the actual plot finally does kick in.

There are a lot of good ideas in this movie and, of course, the game. The mythology behind the main tomb explored here is genuinely interesting and it's fun to learn more about it as the film develops. Lara's relationship with her father (played by Dominic West) is convincing and adds a welcome heart to an otherwise bland action movie. Plus making the villain (an intimidating Walton Goggins) part of a bigger plot is a clever way to set up a potential sequel. Gamers should appreciate the puzzles that Lara Croft has to figure out and the traps she's faced with as they all feel true to the games, along with the many falls, jumps and grunts you'd expect from that character. Unfortunately, while it is satisfying to see Lara Croft find mysterious keys or avoiding spiky stone logs Matrix-style, those few moments are not enough to elevate what is a disappointingly vapid film to something above average. This is a surprisingly generic approach to a character that could easily command a genuinely iconic franchise. The action presented here mostly works and you can tell there's a great story in there somewhere but the film is bogged down by irritating filler, a weak script, a general lack of ambition and a Lara Croft who may be worthy of a run-of-the-mill blockbuster but who just isn't cool.

Substance-wise, it's a touch above the rather one-dimensional 2001 film but, by rejecting what worked in that one, namely its campy fun quality, it denies itself a chance to be consistently entertaining and truly memorable. As it stands, this Tomb Raider isn't altogether bad but it is vastly uneven and often quite dumb, which would be fine if it was more tongue-in-cheek but, alas, it isn't.