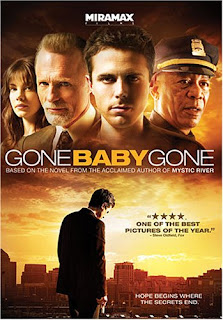 Directed by Ben Affleck, Gone Baby Gone was a 2007 neo-noir mystery starring Casey Affleck as a private investigator hired to solve a missing person case along with his girlfriend, played by Michelle Monaghan.

This Boston-set drama follows street-smart P.I. Patrick Kenzie (Casey Affleck) as he conducts his own investigation, occasionally sharing his information with the police. He gets closer and closer to the truth about the missing little girl's whereabouts through his, often dodgy, contacts. His ability to talk to people on their level, without sounding condescending or too much like a cop, means he manages to get a lot more information from locals, criminals and other suspects. The plot is set into motion when the missing girl's mother makes an emotional plea for someone to find her daughter on television and the child's aunt soon hires Patrick, despite his initial reluctance to take on the case. The deeper he gets into this story, the more secrets he discovers leading to some disturbing red herrings and a few big revelations. Gone Baby Gone feels a bit like Chinatown with its noir puzzle-like intrigue and dark tone. It is also just as compelling since it cleverly sends you in the wrong direction quite a few times and the end twist is rather unexpected and effective.

This was Ben Affleck's first big writing gig since he proved himself to be a talented writer with Good Will Hunting back in 1997. This confirmed that he was not a one-hit-wonder in that department and that, indeed, he knows how to tell an intense, original and interesting story. The dialogues and humour have a genuine feel and the plot is carefully crafted yet never over-the-top or too labyrinthine. This is a complicated story told in a simple enough way that you can easily follow it but with enough nuance that it remains a mystery until the third act. What starts off like a standard missing persons case ends up in a tough moral debate: is it right to do the right thing if the way that you get there is wrong? A lot of the characters in this film mean well and, ultimately, their goal is an admirable one but their path is so flawed that you can't help but wonder if the ends justify the means or not. This is a remarkably well written and directed film with an excellent cast that includes Ed Harris, Morgan Freeman and Amy Ryan, who received an Oscar nomination.

If you needed proof that Ben Affleck is most definitely a valid all around filmmaker then this is certainly a good place to start. Gone Baby Gone is a suspenseful drama that manages to stay fascinating until the very end and raise a lot of interesting questions along the way.