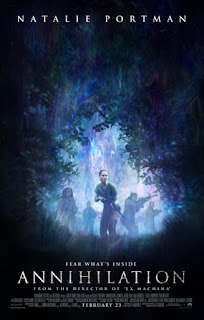 Based on the novel by Jeff VanderMeer and directed by Alex Garland, Annihilation is a science fiction film about a team of researchers who are sent into the mysterious Area X: a gradually expanding coastal area surrounded by an inexplicable shimmer.

Unlike the book, the film slowly builds to the team's entry into Area X, instead of throwing you into the unknown right off the bat. Natalie Portman is Lena, a biology professor and ex-US Army soldier whose husband (played by Oscar Isaac), who was believed to be dead, comes back to her one day after going into the "shimmer" himself. Lena and four others, including Jennifer Jason Leigh's psychologist, are sent in to explore as increasingly unexpected events start to occur. Adapting this story was never going to be easy as there's a myriad ways you could approach it. This could have been a very arty, impenetrably abstract affair or an Alien-style straight-up horror movie or even something else entirely. Garland may take some liberties with the original novel but he captures the right tone, meaning it's both a horror movie and something a bit more out-there. This is a surprisingly brutal film with some beautiful visuals surrounding the grittier and more disturbing elements of the story. Think Alien or The Thing if Michel Gondry was directing.

Natalie Portman captures the desperation and curiosity of her character perfectly in one of her best performances to date. Lena is trapped between a past filled with regrets and a possibly doomed future so getting the contradiction (her need to explore and her consuming guilt) right was key and Portman does an amazing job with that. While the visual effects help sell the incongruous look of the Area X setting, they never overpower the film which feels, at times, like a far less artificial take on The Hunger Games in that the flora and the fauna appear to be at odds with the team we're following. This is a fascinating science fiction story about interconnectivity and other existential themes. It's somewhat more cerebral than most modern sci-fi films and it never holds your hand through it, which is refreshing, plus it never rushes through anything. This makes it a tough film to get into if you're not ready for it. It's as if the slow start-and-stop pacing is almost daring you to stick with the film but, like Lena, you can't help yourself because something is pulling you in somehow.

It might prove too odd or even gory for some but Annihilation should please sci-fi fans looking for something a tad more challenging and unique than the usual blockbuster fare. It may not be quite as overwhelming as it probably should have been but it's still a bold and ambitious watch.