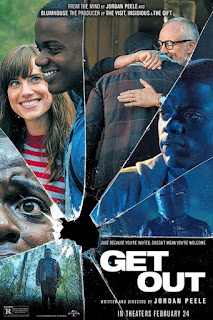 Few films from 2017 made quite as much noise as Get Out in terms of starting a conversation about social issues. Directed by Jordan Peele, this was a horror film satirising more subtle forms of racism through a full-on psychological thriller with gory elements and a twisted sense of humour.

Get Out sees Chris (Daniel Kaluuya) and his girlfriend Rose (Allison Williams) drive to the latter's parents' house so Chris can meet her family for the first time. Chris is somewhat reluctant at first because the parents haven't been informed that he his an African-American but he goes along with it eventually. This leads to thoroughly awkward encounters with Rose's parents and other family and friends who seem friendly enough at first but are also kind of creepy. When Rose's mother Missy (Catherine Keener) hypnotises Chris and, later, a guest loses it, warning Chris to "get out", the film descends into madness and this family turns out to not be at all what they seem. This is a surprisingly biting and unapologetic satire that will, no doubt, make some people uneasy and continue a debate about itself for quite a while. By having all the White people be the villains, it firmly puts you in Chris' shoes and you too find yourself wanting to leave this nightmare where almost no-one can be trusted but also it makes you wonder about the film's overall message quite a bit.

The unsettling themes the film deals with are certainly rooted in reality but the story is exaggerated so much that taking everything the film does too seriously or literally would likely not make much sense. Get Out brings up uncomfortable truths then ramps everything up to 11 as it introduces brainwashing and brain transplants before leaving you on a bit of a question mark. As a horror film, this is quite effective since you're never quite sure where it's going even if parts of it are rather predictable (Rose's character arc) plus you are definitely on Chris' side throughout and desperately want him to get away. Peele displays a real talent for slowly building an unsettling atmosphere and Get Out is akin in tone to something like Rosemary's Baby... with some Being John Malkovich thrown in. The cast is very good, the film looks great and it is genuinely creepy so job done on that front. The weakest aspect of the film has to be its abrupt ending that, frankly, is just not punchy enough and could have been much better. In fact, a final scene clarifying the film's message a bit more while throwing a shocking final twist at us might have been a good call.

Get Out certainly earned both a lot of the praise it received and its Best Picture Oscar nomination since it made more of an impact than pretty much any other film in 2017. As imperfect as it is, it's hard to deny that the film is a bold, solid horror film that gives you a lot to think about and that makes it well worth a watch.