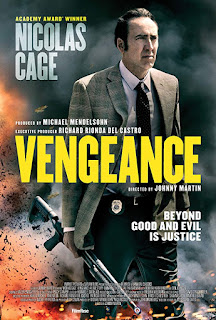 Another year, another Nicolas Cage film that passed by almost unnoticed. Recently released on Netflix, Vengeance: A Love Story is a thriller about a woman who is abused by a group of men one night in front of her daughter and the aftermath of that traumatic event.

On paper, this sounds like your typical revenge plot where someone is taken or raped or killed and a good cop takes the law into his own hands once all else fails. The film, perhaps aware of how overplayed that subgenre has become, makes a genuine attempt to keep that aspect of the film in the background and focus on everything else. While this was a wise decision as it allows us to spend more time with and feel for Teena (Anna Hutchison), the victim, and her daughter Bethie (excellent newcomer Talitha Bateman), the film is unfortunately not clever enough to really explore the impact of rape on someone or the justice system's failings on the matter in a way that rings true. Vengeance is like a poorly written essay: you know what the writer is going for and you agree with their ideas for the most part but the vocabulary, spelling and reasoning is so off that it's ultimately a missed opportunity. We're told Nicolas Cage's character, hero cop John Dromoor, isn't very talkative and we get the idea that he is some kind of quiet guardian angel but Cage brings nothing to this character and he sleepwalks his way through a role that, had it been better written, could have been worthwhile.

The rest of the performances range from decent to ridiculously over-the-top as it becomes pretty clear early on that the film has no idea how real people act or talk. The trial scene, for example, is handled in such a silly way that it completely distracts from whatever emotional punch it was going for. Director Johnny Martin, who is more known for his stunt work, struggles a bit with an underwritten script that didn't seem to inspire him much and, as a result, the performances are all over the place, the tone is disjointed and some sequences are confusingly shot. Ultimately, you should not be laughing at serious scenes in a film with such a dark and disturbing premise. You'll constantly be working out a better story in your head and wondering why some scenes just don't work and whether Nicolas Cage is actually awake or not. This is a shame because there is definitely a good film with a relevant story in there somewhere, it's just not handled correctly. The film is also weirdly paced, with the first half of the film dragging for no reason, but at least the very few scenes where Cage goes vigilante and takes out the bad guys are genuinely satisfying so there's always that.

Vengeance tells a story that should have been hard-hitting and emotional but, due to various caricatures and clumsy execution, the film just comes off as inept. Do yourself a favour and watch any of the other revenge-themed Nicolas Cage movies, or the underrated The Frozen Ground.