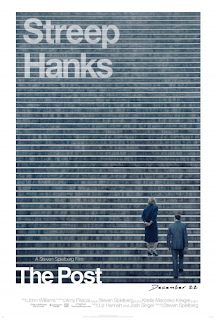 With the current political climate the way it is, there couldn't have been a better time to release The Post, Steven Spielberg's dramatic account of when The Washington's Post released leaked documents exposing a massive cover-up linked to the Vietnam War in the early 70's.

Meryl Streep plays Katharine Graham, who became the owner of The Washington Post following her husband's death, and Tom Hanks is the newspaper's editor in chief Ben Bradlee. The latter is looking to elevate The Post beyond dealing with relatively trivial stories and constantly reacting to other publications' breaking news. When an ex-military analyst leaks documents to The New York Times proving current and past Presidents knew the Vietnam War was a disaster and still sent troops despite it being a lost cause, Richard Nixon's administration attempts to intimidate The Washington Post into not releasing more files. As Bradlee and his team rush to gather the rest of the leaked documents, Graham is faced with a tough personal and professional dilemma as allowing the files to be released could land everyone in jail and lose her some high-level friends but it could also bring the truth to the forefront and revive her newspaper's image. Similar to how Spotlight celebrated the persistence of a small group of journalists working towards exposing a troubling story, The Post shows the risks taken by everyone who took part in this event and applauds their courage.

Again, like Spotlight, this is probably a story more suited to a documentary format as seeing actors speaking intensely in various rooms doesn't make for a particularly thrilling experience on the big screen. And, while Spielberg films it all with exactly the amount of visual flair you'd expect, even he is very restrained so there's not much there in terms of spectacle. Only John Williams' excellent score is allowed some flourishes. Luckily, all the performances are so good that, if you are interested in this subject matter, that should keep you compelled throughout. Meryl Streep is particularly effective in a role that landed her yet another deserved Oscar nomination. The likes of Bob Odenkirk and Sarah Paulson make the most of their supporting roles and it's simply tough to find a bad performance in the whole cast, except maybe for whoever impersonated Nixon by awkwardly waving their arms around. The film's message is relevant and optimistic: it's an important reminder of what journalism is all about, why we need the free press plus it's a warning to anyone who might be thinking of censoring it. Sometimes the film is a bit heavy-handed and redundant in its approach but, overall, it tells its story well and you do ultimately care about these people and their journey.

The Post may not be the visually striking, suspense-filled movie you might expect from Steven Spielberg. This is a decent, sharply-written, slow-paced drama with some strong leads at its heart and a story that is surprisingly timeless so certainly still worth watching.