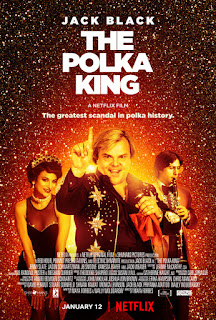 Based on the true story of polka band leader Jan Lewan, The Polka King is a new comedy released by Netflix starring Jack Black, Jenny Slate and Jason Schwartzman. The film follows the rise and fall of Lewan, who was convicted for running a Ponzi scheme in the early 2000's.

Jack Black is in familiar territory here playing a likeable, well-meaning yet off-beat and troubled character based on a real person like he did in the underrated 2011 film Bernie. This story, however, isn't so much dark as it is fascinatingly ridiculous: the idea that a little-known Polish polka singer in Pennsylvania somehow convinced a lot of people to invest in him for years is so surreal that it's ripe for parody. Black could have easily turned this role into a Nacho Libre-style cartoon but, even though he puts on an impossible accent here, he still captures what made this guy so appealing to others and shows different sides to his personality. Most of the time, Lewan is friendly and generous, always inspiring and entertaining others with his music and his belief in the American Dream, but his desperation leads him to become a fraud in spite of himself so he's a bit of a tragic character in a way. That said, there's also a bit of anger balled-up in him and you can tell he's enjoying his booming popularity and gathering as much dough as possible, even when he knows he's doing the wrong thing.

Lewan's complete lack of self-awareness admittedly makes him a bit of a clown and the film has some fun with that, especially during the polka performances which include people dressed up like chickens and bears, but the film never loses track of what makes its characters who they are. The supporting cast is excellent from Jason Schwartzman's clueless musician to Jacki Weaver's scene-stealing, rightfully disapproving mother-in-law and Jack Black has a great time throughout. This is a well made movie all around and, really, the only thing that lets it down is a lack of surprises. One scene sees Lewan promise an unlikely meeting with the Pope to a group of people and it looks like his fraudulent business is about to crumble. But when he actually makes it happen, that's a genuinely funny stand-out moment and one wishes that the last third of the film had been this bold. Of course, basing a story on true events, or in this case a documentary based on true events, is limiting but this unfortunately makes The Polka King rather predictable. It's never dull, however, and there's always a funny line in there or an entertaining performance making it all worthwhile.

One of the better comedies released by Netflix, The Polka King is a fun pseudo-biopic with lots of charm, awful music and a truly fascinating character at its heart. It may look corny and too wacky for its own good but it's actually quite good and well worth checking out.