THE LEGEND OF TARZAN - REVIEW 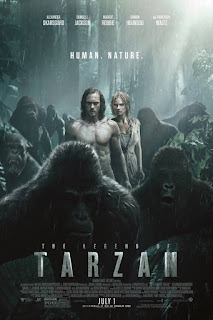 In 2016, Warner Bros. released The Legend Of Tarzan, an attempt to give Edgar Rice Burroughs' classic character a proper blockbuster franchise with Alexander Skarsgård as Tarzan and Margot Robbie as Jane Porter. The film was a domestic flop despite performing quite well abroad.

Picking up after Tarzan has already been accepted back into civilised society, the film then briefly flashes back to the character's familiar origins (being raised by apes etc.) a few times before sending him back home to the African jungle where his beloved Jane is captured by a cruel Belgian diamond hunter. Yes, this is one of those super-serious gritty reboots that attempts to introduce us to a well-known (yet revamped) hero but also tell a brand new story by working as some kind of sequel to a never-made film. The idea being that people who are very familiar with Tarzan and expect a more adult take on the character like 1984's Greystoke: The Legend Of Tarzan, Lord Of The Apes could enjoy this spiritual follow-up/remake and that everyone else would get a decent idea of what Tarzan is all about. Unfortunately, a good portion of the film is spent telling us about who Tarzan is and how he has a unique connection to animals but we don't really get a sense of why he's worth caring about. Seeing him as a child, bonding with the apes is something you can't really rush through since it's kind of the core of the character and it allows us to understand him better so meeting him first as the smug, wealthy John Clayton III doesn't help us connect with him all that much.

It doesn't help that Alexander Skarsgård, who admittedly definitely looks the part, only occasionally nails Tarzan's wild nature and is given little to work with. This goes for most of the cast as the writing feels redundant and generic which makes for a slow, often dull film with underwritten characters you wished you liked more than you do. Even Christoph Waltz feels like he's going through the motions here in a villain role that we know he could have easily knocked out of the park. Only Samuel L. Jackson manages to have a little fun as Tarzan's friend. Similar to how The Lone Ranger barely showed us why that hero was cool, Legend Of Tarzan shows us a lot of Tarzan failing at what he's trying to do and only being the Tarzan we all know and love in very short, too short bursts. You can tell that there was some ambition here, however, as the dead serious, melodramatic tone along with a slightly more realistic depiction of Africa suggests that the film might have thought it was a sweeping epic at some point in time. But the drama is too hollow, the story is too predictable, the film is too boring and joyless to make it work as anything more than a sometimes tolerable missed opportunity. It looks fine and it has some good ideas here and there but that's about it.

There are far worse movies than The Legend Of Tarzan but there are far better Tarzan movies also. There was some potential here and the appealing cast just about keeps things afloat but this is just not fun or dramatic enough to keep anyone all that interested.