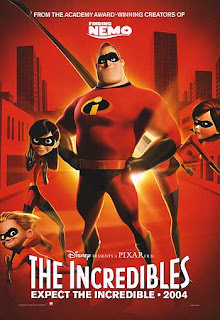 As we patiently wait for next year's much anticipated sequel, it's worth revisiting Pixar's The Incredibles, the animated superhero comedy that makes every Fantastic Four movie to date look like a cinematic practical joke.

Indeed, there are a lot of similarities between the Marvel superteam and the characters in this movie from their powers to the matching outfits, something that should have made the film dismissable as too derivative and a bit of a rip-off but, in Pixar's hands, still comes off as very fresh and original. The film first introduces us to a world where superheroes are a common thing: they are interviewed like celebrities and their good nature is taken for granted. When super-strong Mr Incredible (voiced by Craig T. Nelson) saves a man from jumping off a building, the latter sues him for wrongful saving since he never asked to be rescued and this leads to a long court battle ending in all superheroes having to hide their powers. Cut to many years later and Bob Parr (Mr Incredible) is married to Helen (aka Elastigirl, voiced by Holly Hunter), they have two kids Dash (super-speed) and Violet (invisibility), and Bob now works a desk job to support his family. When he is approached to use his powers in a top secret mission by a mysterious organization, Bob sneaks off to a remote island where he attempts to relive his glory days as a superhero but, of course, not all is as it seems.

The Incredibles is gorgeous from start to finish in terms of visuals and, since this was the first time that Pixar went all in with human characters, getting their look right was key. Instead of going for a realistic look, which might have led to more of Polar Express' uncanny valley, the characters' features are exaggerated and the whole thing has an old comic-book vibe to it. This movie is not just visually pleasing but it's also a spectacle: the action sequences are genuinely thrilling, beautifully choreographed, colourful and it's really fun to see these heroes use their powers in increasingly creative ways. The writing throughout is excellent: Brad Bird's script is very sharp, very funny and has a lot of great ideas in it that do pay off. As fun as it is to spend time in a world of superheroes, the film quickly understands that seeing these larger-than-life characters attempt to live a normal life is much more interesting and will create a unique dynamic. We get to see the people under the super-suits, who they really are and, it turns out, they're a lot like us so we relate to them much more. The supporting cast, which includes Jason Lee (Syndrome), Samuel L. Jackson (Frozone) and Brad Bird himself (Edna Mode), is also well worthy of mention.

What The Incredibles lacks in originality, it more than makes up for in overall competence. This is not only a visual treat but a clever comedy, an entertaining action film and a worthy superhero movie. This is the Pixar movie everyone actually wanted a sequel to so let's hope that one doesn't disappoint.