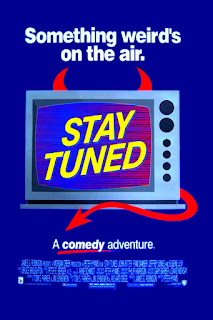 Released in 1992, Stay Tuned was a dark comedy about a couple who gets sucked into a demonic satellite dish before being forced to survive living inside various TV shows from Hell as their kids try to help them back on the other side.

John Ritter is Roy Knable, a couch potato loser husband who is too addicted to television to notice his marriage is falling apart and Pam Dawber plays his much more successful wife Helen. One day, Roy meets the mysterious Mr. Spike (Jeffrey Jones) who offers him a free trial for a new TV with a brand new satellite dish. Roy accepts and, soon enough, he and Helen find themselves stuck in all kinds of twisted shows from westerns to gameshows, even cartoons. The concept for Stay Tuned is very silly but also very clever as it provides a lot of opportunities for social satire and creative scenarios, not to mention hilarious puns (Fresh Prince Of Darkness, Wayne's Underworld etc.). It's easy to see why Tim Burton was once attached to this project as it's certainly the kind of off-beat, Beetlejuice-esque black comedy he enjoys lending his style to. Even without him, however, Stay Tuned is a visually inventive film with some great special effects and a brilliant animated segment directed by Chuck Jones himself. There are a lot of great ideas here and most of them do pay off even if this is such a big concept, you could have easily gone even further with it.

Critics were not too wild about this film and it did poorly at the box-office but it's frankly hard to see why. You've got a fun, original concept with a lot of potential, a good cast, flashy visuals... Perhaps we loved television too much to laugh at its darker side back then? Indeed, Stay Tuned paints a pretty grim picture of TV with the Devil having his own HellVision network toying around with people's lives. One of the film's main points is that television is often dumb and the fact it's easy to get lost in it is an issue. However, we're also shown how much fun it is and how it also has a lot of benefits so, ultimately, while Stay Tuned does satirize television, it also celebrates it quite a bit. Truth is, comedies with a darker edge like The Cable Guy, Neighbors or this one can sometimes come off as mean-spirited and this can turn off both critics and audiences. This movie is pretty much destined for cult adoration at this point and one hopes it'll enjoy some kind of rebirth one day since it's a very clever, funny little movie and it is much better than it was given credit for.

If you like your comedies supernatural and a bit mad then Stay Tuned is a safe bet: this is a sometimes goofy, sometimes cruel, often punny rollercoaster ride through Satan's television and it's one that's well worth taking.