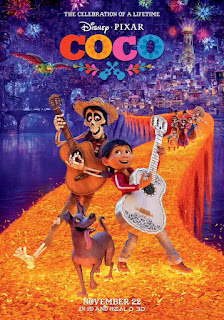 Critically acclaimed and comfortably ruling the top of the box-office, it looks like nothing can stop Pixar's Coco from becoming another significant hit for Disney, not even sticking a vastly unpopular Frozen 20 minute short at the front of it.

Coco is the story of 12 year-old Miguel who dreams of becoming a musician like his idol Ernesto De La Cruz except his family has firmly been anti-music for generations so when they destroy his home-made guitar and forbid him to follow that path, he runs away to prove himself by playing music during the Día De Muertos festival. As he attempts to steal the long-dead De La Cruz's guitar in a cemetery, he is somehow transported to the Land Of The Dead where he learns that he'll need to get his family's blessing in order to come back to the land of the living. Revealing any more than that would be cruel so let's leave it at that story-wise. There's something familiar about Coco from the musical skeletons (Corpse Bride) to the Day Of The Dead setting (Book Of Life) yet it never feels too derivative thanks to some excellent writing and a completely different approach altogether that culminates in an emotional punch neither aforementioned films quite managed.

Unsurprisingly, the animation throughout is gorgeous from the colourful, detailed scenery to the intricate movements of the skeleton characters. The plot takes a bit of time to get going but once it does, it never lets go and you'll find yourself fully immersed in this story set between life and death about being remembered or being forgotten in the quest of one's dreams. Making death the next step in life rather than the ultimate tragedy is only one of this film's many clever touches as it celebrates making the most of life and doing what makes you happy while also warning about achieving success without dignity and taking your family for granted. Much like Inside Out, Coco's message has a fair amount of depth to it but it's put across with so much joy that, even if the film sparks some tears, they'll be earned and will leave you feeling pretty upbeat. Expect a few catchy songs, lots of surprises, a truly dislikable villain and a random but amusing Frida Kahlo cameo.

Once again, Pixar has delivered a sweet, funny and sophisticated animated gem with tons of charm, laughs and tears. This is a fun movie the whole family can enjoy and it's well worth seeing on the big screen.