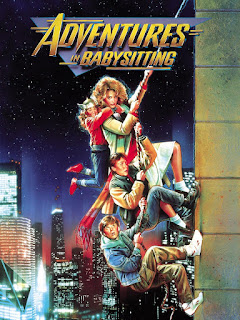 Adventures In Babysitting was a 1987 comedy directed by Chris Columbus about a babysitter who is forced to drag the kids she was meant to be watching to downtown Chicago in order to help out a friend thereby having to deal with more chaos than she bargained for.

Elisabeth Shue is Chris Parker, the babysitter in question who we first meet dancing around her bedroom as she gets ready for a date. She is unfortunately then told by her boyfriend, played by a young Bradley Whitford, that the date is a no-go so she reluctantly agrees to babysit someone's kids: the rather geeky Brad (Keith Coogan), who has a crush on her, and his Thor-obsessed little sister Sara (Maia Brewton). When Chris' friend Brenda (Penelope Ann Miller) runs away from home then promptly regrets it, Chris now has to go and pick her up downtown with the kids, including Brad's goofy friend Daryl (Athony Rapp) who decides to tag along. After their car loses a tire, it all goes downhill from there are they meet all sorts of weird characters and find themselves being hunted down by a gang of mobsters. Some highlights include a risky escape literally above a group of bad guys, an impromptu performance in a blues bar and a tense encounter with Vincent D'Onofrio's Thor-looking garage owner Dawson.

This movie has a lot of charm from the get-go. Elisabeth Shue and the rest of the main cast are very likeable and even those more minor characters are played with gusto from friendly thief Joe Gipp (Calvin Levels) to the blues musician played by Albert Collins, the creepy hook-handed tow truck driver and George Newbern's college student. Everyone throws their hat in the ring to make this movie as fun as possible and it works. This is a light-hearted comedy and although there's admittedly not much to it, it's such an enjoyable ride that you want it to keep going well past the final scene. To get the nitpicks out of the way: the very prominent "babysitting is dangerous" joke is probably the weakest of the bunch, which is a shame since this is an overall very funny movie. Also, the plot leaves a few things up in the air you wish had been resolved and the romance thrown in isn't all that convincing. None of that should tarnish your enjoyment of this film, however, as it's packed full of enough great moments that it's almost impossible to dislike.

The paper-thin premise could have gone either way but Adventures In Babysitting wisely never gets cheesy or too silly for its own good. This is a fun 80's comedy with tons of charm, plenty of laughs, good performances and even some solid action in there so definitely give it a chance.