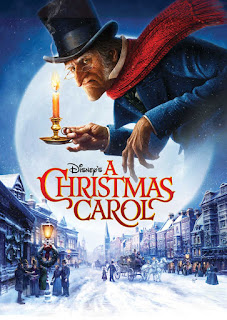 Despite the relatively unkind feedback Robert Zemeckis received after experimenting with CG animation in The Polar Express, he persevered and, in 2009, he delivered his own version of A Christmas Carol starring Jim Carrey as Ebeneezer Scrooge... and the three ghosts.

While the animation in Polar Express gave an unwanted creepy puppet quality to the child characters, here the visuals are much more polished and the actors' expressions are captured perfectly. It's fascinating to see Jim Carrey being turned into, not only an old man, but a younger Scrooge, a candle ghost and a big bearded spirit dude. The rest of the cast, which includes Gary Oldman, Colin Firth and Bob Hoskins, are also beautifully rendered into their CGI characters. There are still creepy visuals but this time it's very much on purpose as Zemeckis appears to have picked the scariest aspects of Polar Express and Beowulf in order to give every kid watching this movie nightmares throughout the holiday season. Whether it's Jacob Marley's jaw cracking open fully, one spirit physically decomposing as he laughs or the appropriately grim third act, there is always something surprisingly dark going on in this movie and, although it makes sense with this story, this doesn't exactly make it the most family-friendly Christmas movie out there.

Parts of this film stick pretty closely to the classic Charles Dickens novel, other parts not so much. In order to make this a worthwhile 3D release, some liberties are taken with random action scenes being thrown in as we see Scrooge fly through the air, slide down the icy streets of London and shrink to the size of a mouse. These are fun scenes and they look great in 3D, the whole movie does, but they are distracting to the overall tone the film took great care to establish in the first place. That time could and should have been used to dig a bit deeper into Scrooge's past, like his relationship with the love of his life, which is an integral part of this story. The film still has its heart in the right place, the Tiny Tim parts still pack an emotional punch and Jim Carrey is wonderful throughout: his Scrooge is one of the most intimidating and unpleasant misers ever put on screen and his performance is refreshingly restrained until the inevitable upbeat ending. One wishes that all the care that was put into making this a faithful adaptation early on had continued throughout the movie but, overall, this is a decent interpretation with some great moments and impressive visuals.

Although perhaps too scary for younger viewers, this A Christmas Carol is an enjoyably dark and unique-looking adaptation with a lot going for it. It's a little uneven and disappointingly rushed at times but what it lacks in consistency, it makes up for in creativity and spot-on performances.