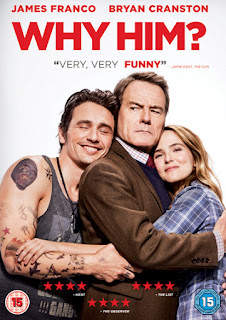 Because Christmas wouldn't be complete without an obligatory raunchy holiday-themed Hollywood comedy, 2016 gifted us Why Him? starring Bryan Cranston and James Franco as a mismatched potential father and son-in-law who finally meet around Christmas time as hilarity supposedly ensues.

The plot sees Stephanie (Zoey Dutch) invite her parents to meet her older boyfriend Laird (Franco) for the first time after it is revealed via a disastrous Skype call that they were seeing each other for a while. As it turns out, Laird is not only the super rich CEO of a video game company but also an eccentric, impulsive weirdo who just says and does the first thing that pops into his head. Having such a wacky character clash with the comparatively uptight and square Ned (Cranston) should have been an easy way to bring some laughs to the table, much like how Planes, Trains and Automobiles did back in 1987. One big problem becomes apparent very quickly, however: neither Bryan Cranston or James Franco have anything to work with. Their characters are so inconsistent, unconvincing and altogether poorly written that the former is reduced to constantly mugging at the camera and the latter just says random stuff in the hope that some of it sticks and gets a chuckle. Ultimately, though, this is an embarrassing effort for all involved, even Tina Fey who looks frankly ashamed to be in this.

Although there are obvious exceptions, Christmas comedies are rarely all that good and even the decent enough ones like Elf suffer a bit from the holiday's inherent cheesiness. Standards are therefore generally low when it comes to that genre and I, for one, don't ask for much from a Christmas comedy, only that it's entertaining. Why Him? could be forgiven for having almost no story, for its one-dimensional characters, even its reliance on toilet humour but, at almost two hours long and with not one laugh coming out of it, it soon becomes a chore to sit through. If there was a finished script for this, it did not seem to understand its own jokes and that kills any sort of humour it tried to set up. Indeed, there are funny situations being introduced here but none of them deliver and scenes awkwardly cut from one to the other after a joke has inevitably fallen flat, as if the film was giving up on itself while it was going on. There are enjoyable trashy Christmas comedies and this is not one of them: it drags throughout, it wastes its appealing cast and it's painfully unfunny.

Don't be fooled by the big names involved, Why Him? is much worse than you think it'll be. It looks like dumb fun but it's actually intelligence-insultingly bad, about as funny as a dead reindeer and it's frankly lazy, even for a throwaway Christmas film.