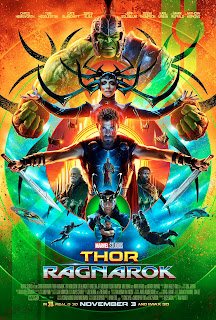 As the Justice League gets ready to finally unite in DC's latest crossover, Marvel delivers its third Thor movie: a neon-lit campy roller-coaster ride through the galaxy that sees the God of Thunder lose his beloved Mjolnir hammer and much more.

The trailer for Thor: Ragnarok promised a colourful Flash Gordon-style fantasy epic with tons of over-the-top action, larger-than-life characters and a rocking soundtrack. Taking a page out of Guardians Of The Galaxy, this was set to be the inter-galactic adventure we wanted to see from Day 1. The good news is that Marvel wasn't lying and we got exactly what we expected: a ridiculously fun, action-packed comic-book sci-fi romp which should please the fans and effortlessly entertain everyone else. Chris Hemsworth has a lot of fun (perhaps too much fun?) as Thor and, even though he's much more bumbling than he probably should have been, he remains charming and likeable throughout. The plot sees Hela (Cate Blanchett), the Goddess of Death and Odin's first born, come back to reclaim Asgard as both Thor and Loki find themselves stuck on some random planet, the former having to battle enemies in an arena for Jeff Goldblum's fabulously sadistic Grandmaster's amusement.

When we last left Asgard, Loki (Tom Hiddleston) had assumed the throne by impersonating Odin (Anthony Hopkins) and the payoff to that, which I won't ruin for you, is very funny here. In fact, a lot of the jokes do hit the mark in this movie from all the tongue-in-cheek Avengers references to Thor's "strange" encounter with one of Marvel's newest heroes and his rocky relationship with Loki and The Hulk. Mark Ruffalo is once again very good as the latter and his alter-ego Bruce Banner, sadly reminding us that this is probably the closest we'll come to a new solo Hulk movie. With Natalie Portman's Jane Foster having dumped Thor off-camera, we are introduced to new potential love interest and alcoholic bounty hunter Valkyrie (Tessa Thompson): an Asgardian badass with her own score to settle with Hela. She makes a good addition to this movie's unlikely team.

The real strength of this third movie is its charm and visuals: whenever Thor and the others are fighting bad guys, it's a gorgeous spectacle and there's never a dull moment. The Thor/Hulk fight is a thrill, as is the opening confrontation with Surtur, the Star Wars-style spaceship-hopping escape (don't ask) and, of course, the final face-off with Hela. The colourful action sequences never disappoint and it's refreshing to see the God of Thunder actually use his lightning powers properly for once. Some characters are sidelined for time like Heimdall (Idris Elba) and Odin but both are given enough good moments that they never feel too underused. As for the villains, Cate Blanchett is excellent as Hela despite the fact that we really don't spend that much time with her, which is a shame as she could have easily been one of Marvel's best foes. Jeff Goldblum is a joy from start to finish but you get the feeling that there was plenty more Goldblumey goodness shamefully left on the cutting room floor. Karl Urban has a minor role as an Asgardian guard-turned-executioner but he makes the most of it.

There's a lot to like about Thor: Ragnarok yet it's not without its flaws, the main one being the writing. By making every single character crack jokes left and right in every scene, everyone starts to sound exactly the same and this can be frustrating, especially when it extends some scenes that really didn't need to be that long. This kind of jokiness doesn't really fit some of the characters and the more serious aspects of the story having to do with Odin's departure, Hela's revenge and Asgard's fate get lost in a sea of comedy routines that hit the mark sometimes but often don't. Tonally, this is a bit of a mess even if, mostly, it's a light-hearted watch. I would have gladly replaced some of the overlong jokes with more character development and filling up small plot holes. Then there's the CGI which is both very beautiful at times (Valkyrie's painting-like flashback) and just not good enough at other points: Korg (voiced by director Taika Waititi himself) is a fun character but makeup effects would have been much less distracting for him and Hulk's CGI is frankly a bit hit-and-miss.

To cut a long review short, let's just say that Thor: Ragnarok is a visual treat with lots of funny moments, likeable characters and some thrilling action making it another worthy Marvel sequel and arguably the best Thor movie to date. It's also perhaps too silly for its own good and another, more sensible draft of the script could have improved it a great deal.