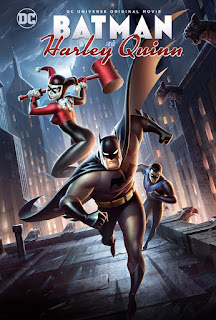 This year saw the release of yet another DC animated feature as Batman and Nightwing reluctantly team up with a reformed Harley Quinn to track down Poison Ivy and Floronic Man who are planning to turn everyone into plant people for whatever reason.

With a reliable voice cast including Kevin Conroy back as the Dark Knight and an animation style akin to Batman: The Animated Series, Batman and Harley Quinn looked like a fun throwback with a lot of potential for an interesting Harley Quinn storyline. Melissa Rauch voices the character and she does a decent job capturing just the right amount of feisty madness, not to mention delivering an unexpected rendition of Blondie's "Hanging On The Telephone". Unfortunately, that's about where the praise ends for this thoroughly disappointing and misguided DC outing. Story-wise, this is an often distracted mess with an unconvincing and uninspired maniacal Poison Ivy plan at its heart, some of the worst jokes in any DC movie, Batman and Nightwing taking a back seat to a scene-devouring Harley Quinn and an anti-climactic ending that'll make you regret the past hour and a half you spent giving this movie a chance.

The writing is the main problem with this film as Bruce Timm and Jim Krieg drop the ball constantly by having the overall tone yo-yo between juvenile goofiness (including fart jokes) and more raunchy adult themes (the Harley Quinn and Nightwing sex scene) throughout. It doesn't help that everyone seems to be acting out of character with Batman hiring Harley Quinn seemingly just because he couldn't be bothered to do any actual detective work, and the plot is underwritten to say the least. The characters' motivations are inconsistent and the film really feels like filler which is a shame because using the same solid visuals and basic plot, you could have made something worthwhile. A last minute Swamp Thing cameo is wasted and the film ends on an embarrassingly cheesy note. It's like we were promised Batman: The Animated Series and what we got was Batman & Robin... but somehow worse.

If Batman and Harley Quinn is not the worst of the DC animated films, it's right up there. There is really no reason to watch this silly, lazily put together effort. Maybe see if you can find the Blondie clip on YouTube but, otherwise, nothing to see here.