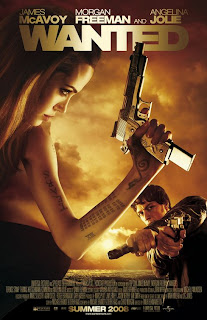 I never thought I'd ever say this but...

Zack Snyder would have made this movie work.

Now, nothing against director Timur Bekmambetov, I liked Night Watch and enjoyed Abraham Lincoln: Vampire Hunter, but Wanted is a perfect example of how to make a movie adaptation of a comic-book and completely miss the point.

Not that Wanted is as bad as something like Catwoman, far from it, but had someone like Snyder taken on the project Watchmen-style, he would have at least represented the visual style of the whole thing accordingly rather than settle for this watered-down, safe Hollywood template. Bekmambetov is a talented director who knows where to point the camera and make fun, dark, amusingly trashy comic-book style movies for relatively not that much money, so this should have been a shoe-in but clearly, for his first big-budget Hollywood outing, studios probably pushed for a safer, more obviously Matrix-ey version of a pretty out-there comic-book. The film made big bucks, thanks primarily to its cast which included the likes of the ever reliable Morgan Freeman, Angelina Jolie and James McAvoy in his first big main US movie role. The trailers looked silly but fun so people flocked to the cinema to check out Wanted only to realise that not only was it nothing like the comics but it wasn't very good at all.

The main problem is, indeed, that it is extremely watered down.

All the Wanted's been taken out of Wanted!

It's like if you made Watchmen but you replaced all the superhero stuff with generic characters you've seen in every action movie of the early noughties. What's the point? As it stands, you've got a completely absurd and laughably ridiculous movie that... for some reason takes itself weirdly seriously and looks just like any other action movie of its time. It's essentially bullet-time: The Movie when it should have been something truly unique and ground-breaking. I honestly believe that Wanted, had it been done right, could have been the new modern threshold for non-Marvel or DC comic-book movies one year before Watchmen and several years before Kick-Ass and Scott Pilgrim vs The World. Same goes for Constantine actually, though that one was actually way more fun. Wanted is a criminally stupid movie which shows potential but feels uncomfortable in its own skin. All the cool stunts and wild action sequences are intertwined with unfunny comic relief, pseudo-quirky one-liners and this overused Fight Club-style monologue telling you everything about a character so dislikable you'll find yourself wondering why you should care about his story at all really early on. McAvoy's accountant-turned-gun-toting-superhero-hitman was always meant to be an anti-hero but here, he's just an unpleasant little man. Admittedly, when the rather nifty twist occurs, you do feel a tad concerned for the character but the movie then jumps right back into mindless chaos so you forget all that in a heartbeat.

I'd be lying if I said I didn't enjoy any of Wanted, though.

Like I said, there are some entertaining action sequences, some great stunts and some cool effects but on the whole, the film is just way too messy in tone to work. Though it's adequately entertaining, the film is never truly "fun". It tries way too hard to be cool and to be smart when really it's as dumb as a lamp post and as cool as a burning log. The (over)use of slow-mo, bullet-time and fast-forward gets old insanely quickly and really ruins most of this movie: it's not clever, it's not new, it's not impressive and just comes off as passé. Max Payne came out that same year and did exactly the same thing, for crying out loud! There's a serious lack of originality in this entire movie from the way it looks to its generic script and its bland characters. In the end, Wanted comes off as needlessly, embarrassingly silly when it should have been gloriously anarchic, completely innovative, out there and proud of it. The only one who seems to give a crap in this entire thing is Danny Elfman, who not only provides a solid and memorable score but sings the theme tune himself!

Do I recommend Wanted? Not really. Chances are you'll find yourself losing interest within the first 45 minutes as not much happens in that time, to be honest. It's far less fun than it looks and is pretty forgettable. While not a complete disaster (the film does have its moments), this Wanted misses the mark and, by desperately wanting to fit in with an overdone template, loses what could have made it relevant and unique.