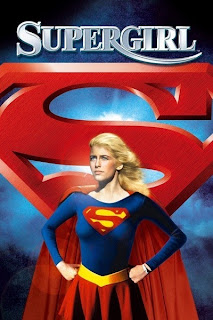 Is it weird that I've seen this movie more than once?

Back in the day, if it had anything to do with Superman and it was on TV, you could be sure that I'd be watching: Lois & Clark, Superboy, Supergirl, it was all good as long as it involved that big red logo and someone wearing colourful, tight spandex with that very same big red logo on it.

I always enjoyed Supergirl despite not knowing half of what was going on during it. As a kid, I just knew that Supergirl was Superman's cousin and that one day, she would be my girlfriend. That was it. Watching the movie today, it's pretty obvious why a lot of it went completely over my head. For one thing, it doesn't make any sense and for another it makes some odd choices plot-wise, to say the least. The film opens on some kind of Krypton-like location which we assume is in outer space but is in fact somewhere underwater through some kind of inter-dimensional gateway. Peter O'Toole and Mia Farrow are hanging out in what is clearly an elaborate set while a young Helen Slater plays with some kind of orange vibrator/magic wand and makes giant mosquitos with it. A macguffin called the "Omegahedron" (a spinning ball) somehow gets lost and it's up to Slater to run off and recover it. Through a hugely confusing turn of events, she arrives on Earth in full Supergirl costume as each viewer at this point furrows their brow and tries to figure out what the hell just happened.

The villains, Faye Dunaway and... Peter Cook, of all people, find the Omegahedron while on a picnic (easily the one thing I wouldn't have expected Dunaway's character to ever go for) and the former, a wannabe witch, decides to use whatever it is to her advantage. And so we get endless shots of Supergirl slowly getting to grips with her newfound powers as she flies around flapping her arms around like a pigeon, making flowers grow with her eye-lasers (?) and beating the hell out of Max Headroom. Strangely, her priority (finding the Omegahedron) gets lost early on as she enrols in a nearby college under a false identity where Lois Lane's younger sister Lucy HAPPENS to be going and who HAPPENS to be dating Jimmy Olsen who proves himself to be more than useless in this movie. The film's attempts to link Supergirl to Christopher Reeves' main franchise really don't work at all and only confuse things further. Our new villainess, meanwhile, who is discovering what her new toy can do, spends pretty much the rest of the movie living behind some ghost train circus ride trying to get some poor random dude to fall in love with her. Every character in this movie has motivations that just don't add up making it very hard to take any of them seriously or even see roughly where they're coming from.

As a movie, Supergirl is just completely random and in terms of story, nothing significant happens until the last half hour where, for some reason, Faye Dunaway creates a big giant mountain in the small town where she lives (subtle) and Supergirl is banished to the Phantom Zone. This is, by far, the best part of the movie as it starts to take itself a little bit more seriously and you actually start caring about some of those characters. That whole Phantom Zone bit gives you a glimpse of what could have been a pretty decent, semi-serious Supergirl movie to rival some of those Superman sequels at least. As it stands, the good bits are too few and far between to make the movie work completely but it's still charming as hell and impossible to hate. For what it is, Supergirl is a fun little movie and even its sillier moments are enjoyable as dated lols. The acting throughout ranges from flat (Slater) to OTT (Dunaway) to pretty good (O'Toole) so the whole thing is somewhat all over the place performances-wise but, like I said, the film boasts enough charm to make sure that, even if you have no idea what's going on, at least you're having a decent time watching it.

Hey, at least it's better than Superman III!