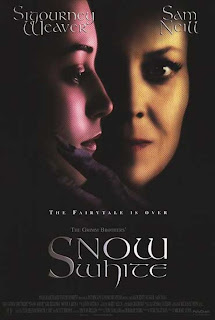 With all the half-baked Snow White movies we got last year, you'd think we would have gotten at least one memorable one. Alas, in order to see a decent, recent, Snow White movie, one would need to go back to 1997's Snow White: A Tale Of Terror.

That was NOT good.

With this one, Sigourney Weaver plays Snow White's step mom and, weirdly, for most of the film you find yourself feeling bad for her! What this movie does is give this character a reason to lose it and become the crazed witch we all know and love/crap our pants thinking about. Even if by the end you're not exactly on her side but you still understand her and feel for her. This is really the witch's movie: Snow White is almost a side character here. Actually, early on, Snow White is pretty harsh on her step mom and contributes to turning her into the villain so you're not a big fan of hers for the longest time. Then she grows up and genuinely feels shitty so you finally start accepting her. For a while, it's like if they told a Little Red Riding Hood story from the point of view of the wolf and made you care more about the wolf than the innocent little girl. It shouldn't work here but it surprisingly does. The film tries to develop characters who are usually portrayed in a very 2D and simplistic way and add some complexity to the whole familiar tale and although, at times, some of that seems a bit much, on the whole it works really well.

And don't worry, you still get the iconic magic mirror, poisoned apple stuff in there.

The film is darker than most adaptations of the story and does try to stick to the more twisted aspects of the Grimm Brothers' tale. The only part of this plot I'm not too sure about is the seven dwarves. Only one of them is a little person and they are all portrayed as these kind of creepy outlaws. I don't mind this last part, it's an interesting take which does deliver eventually since the more Snow White gets to know them the more she realises they're actually good people. One of them even becomes Snow White's love interest, which honestly feels a little rushed and tacked-on. That really is my only complaint with this movie, apart from the fact that the character of Snow White is never really made all that likeable or developed as much as some of the other characters. Otherwise, I really like A Tale Of Terror: its dark tone and grittier atmosphere evoking the likes of Return To Oz while still being very much a Snow White movie. Is it better than Snow White And The Huntsman? In most ways yes, in some ways not quite. The ideal Snow White live-action movie would take the heart and the more twisted aspects of A Tale Of Terror, add the seven dwarves and the huntsman from that other movie and have a more memorable Snow White altogether.

I say "live-action" because, let's face it, Disney are still behind the best Snow White flick around.

Same goes for Alice In Wonderland, by the way.

Overall, while Snow White: A Tale Of Terror isn't perfect, it's well worth seeing for anyone interested in watching a dark, occasionally messed-up fairy tale flick. Sigourney Weaver's evil step mother steals the show and her character arc alone makes this movie a curiosity to definitely check out.