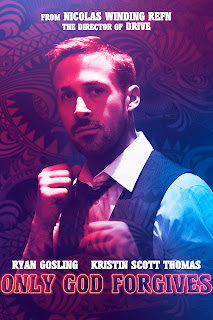 Looking at the reviews that this movie has received so far, it seems that people are either loving it or hating it with a passion. This tends to make for a film that's actually somewhere in between both polar opposite opinions.

Only God Forgives is, indeed, no exception.

Truth be told: I get why people would be put off by it. If you're going into the film expecting another Drive, get ready for a major disappointment. This is a very different movie with a very different approach. On top of it, Ryan Gosling is by no means the hero, or even the anti-hero, of this movie. The best way to look at Only God Forgives is as a David Lynch-esque surreal ensemble fable. A very violent and brutal one at that. The film follows two brothers, their mother and a cop. One brother rapes and kills a young prostitute in Bangkok before getting murdered himself by the prostitute's father and the other (played by a near silent Gosling) is made to seek revenge by his manipulative mother (an intimidating Kristin Scott Thomas). Meanwhile, that machete-wielding, karaoke-singing badass cop walks around laying down the ridiculously harsh law on those plotting to mess with him. Weirdly enough, the cop really is the anti-hero of this movie, not Gosling. Personally, I ended up caring way more about him and his family than that other nutball bunch.

The movie looks beautiful: its colour palette is striking and the art direction is all around spot-on. The sleaze and tackiness of those Bangkok clubs is given a slick sheen giving it all an almost fairy-tale like feel. Think early Wong Kar Wai crossed with late Lynch (Mulholland Drive, for example). The tone of the film is, in some ways, a little more consistent than it was in Drive which, as good as it was, could have done without the whole Carey Mulligan-related corniness. Only God Forgives is classy in its approach but still remains gritty and brutal as its characters butcher each other under what they believe to be justice. It's a nifty mix of arty, abstract storytelling and Vengeance Trilogy(Oldboy etc.)-style violence. The character development is very internal meaning that, for example, Gosling says less than a hundred words during the entire flick and it's really up to the viewer to put the pieces of his character together based on what he does throughout and what we learn through other people. Same goes for the others, although Scott Thomas' matriarch is much less subtle personality-wise.

The pace of the film is quite slow but it never gets dull, there's always something happening and there's always something interesting to look at or think about. Some will dismiss the film as overly pretentious but, personally, its few abstract scenes and off-beat moments didn't distract me or take me out of the film at all. I felt it all fit in together pretty well. My only nitpick with the film is that it would have been nice to see Gosling's character do a little more of what he was meant to be doing (drug smuggling). I like that a lot is implied rather than shown in the film but some things would have been useful to actually witness, if I'm honest. The ending and what happens with Scott Thomas could have also been a tad more creative. Other than that, Only God Forgives does exactly what it set out to do: tell an intense, mysterious tale of bottled anger, repressed sexuality and misguided, bloody justice. And it looks fab doing it!

Overall, I would certainly recommend Only God Forgives, it's one of the better movies of its type I've seen this year and although I get why some people might be turned off by the fact it's not Drive and makes its audience work a bit more, I really think it's all a matter of expectations. Go in without any specific ones and I think you'll be pleasantly surprised.