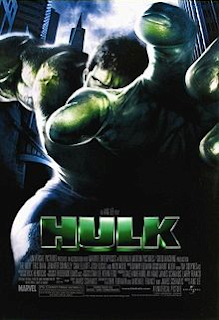 After Blade and, later, X-Men kick-started the first wave of modern blockbuster comic-book movies, Marvel jumped head-first into a Hulk movie and handed the directing keys to Ang Lee, known to Hollywood back then mostly for Crouching Tiger, Hidden Dragon.

An odd choice of director but then again Kenneth Branagh made Thor so...

Maybe not so odd after all.

The result was a unique take on the Hulk character and the superhero genre in general which might have very well been ahead of its time. The film was by no means perfect and did suffer from the occasional "what-the-hell?!" moment as well as a ridiculous running time but looking back, the bad rep it often receives nowadays really feels harsh and, at times, misguided. Visually, Hulk is still an impressive achievement. Lee's film boasts an incredibly stylised look which really pays homage to the comic book form and gives the film a grand, operatic quality. Ang Lee doesn't f*** around! When he makes a comic book movie he makes a comic book movie! Say what you will about the film but you can't accuse it of not trying. There's a genuine attempt here to delve as deep as possible into Hulk's character and understand his psychological torments. Taking his Frankenstein/Jekyll & Hyde origins and focusing on those dualistic themes rather than mindless destruction.

Speaking of mindless destruction: the reboot, The Incredible Hulk, did that rather well.

Hulk is a little bloated with character development and that means that there's less room for big action sequences, so that's half of the film's audience out right there. By the time the big action sequences occur, it's like an hour and a half in (if not more than that) and, as good and as impressive as those scenes are, for many they come in way too late. That's understandable. Hulk is a film which could definitely benefit from a Director's Cut. Not that a lot of it is useless or so bad it should be cut but I could see how a lot of it won't really interest fans of big blockbusting comic book movies. Eric Bana plays Bruce Banner/The Hulk and does an adequate job despite being honestly a bit bland in that role. He does the wounded parts well but Bana should have been allowed to inject a touch of humour into his character because, as it stands, he's a bit of a blank slate. Jennifer Connelly plays Banner's love interest and the daughter of Sam Elliott's army general who tries to contain the Hulk's fury later on in the film. She also does a decent-enough job. On the flipside, as bland as our heroes are a lot of the time in the film, Lee has a ball with the villains. Elliott is as reliable as ever, Josh Lucas plays a delightfully dislikable douchebag and Nick Nolte steals the show as a, I kid you not, genetically-modified poodle-owning janitor who turns out to be Bruce's nutball dad David Banner. He's about as over-the-top as Nolte can get but he really sells it as a mad scientist.

Like I said, visually the film is truly unique: mind-blowing transitions, some terrific Hulk effects which don't look as dated as you might think and great-looking action sequences. Then there's the weird stuff. At one point in this movie, The Hulk fights off a bunch of evil, rabid super-dogs for ages and it's hard to watch that whole scene without thinking: "what the hell am I watching?!". It really is extremely silly. Yes David Banner would experiment on dogs, that's not inconceivable, but it just looks random. At that point in the film we could have done with the Hulk fighting off something a little bit more substantial than dogs. The ending is also somewhat perplexing as Nolte's character goes all-out crazy and becomes a Hulk-like monster of his own. He turns into rocks, CLOUDS, water, it's pretty absurd. Then again, I personally don't go into a Hulk movie expecting much more than something somewhat cartoonish. I guess the fact that Ang Lee's Hulk presents a mix of semi-serious, heavy father/son backstory and kinda goofy comic-book action helped to make the film a tad inconsistent and alienate fans.

Overall, I do think that Hulk is underrated: it's a well made, stylish, daring and unique comic book flick with a lot going for it. It looks fantastic, Danny Elfman's Vertigo-style score is hypnotic, it cares and respects its hero, has some nifty twists and turns and delivers a good bunch of fun campy moments and entertaining action scenes. Sadly, it's overlong and feels bloated with too much content at times. I do like the film and recommend it but I can't guarantee that you won't find it a bit too overcomplicated for what could have been pretty straight forward.

Check it out, don't make me Ang Lee.