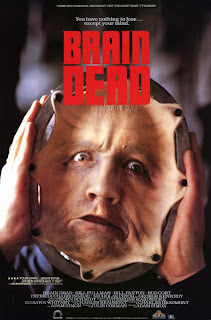 No, not THAT Braindead.

(hence what I just said)

This Brain Dead, however, is a cult B-movie starring the two Bills everyone confuses with each other: Bill Pullman and Bill Paxton. The former being the US President with that awful speech in Independence Day, the latter being that badass vampire from Near Dark. There, now you're all up to speed. In this movie, Pullman plays a scientist with an impressive collection of brains in jars who is conducting weird experiments, to say the least. He specialises in the cerebral dysfunctions which cause mental illnesses so when an old pal, Paxton, who now works for some dodgy corporation, shows up and asks him to find out some crucial information from a paranoid schizophrenic, he is reluctant but agrees to help out anyway. The patient (played by Bud Cort), we're told, was once a brilliant mathematician and it's Pullman's job to find out what part of his brain is having problems and fix it long enough, at least, so that Paxton and co. can get some clear info out of him. Problem is, for some reason, Pullman starts losing it himself and associating himself with his patient to the point where he doesn't know who he is anymore or who to trust.

By the writer of the original The Twilight Zone!, Brain Dead sure puts forward a lot of promising ideas with some really great gory special effects thrown in. Unfortunately, it's pretty difficult to care about anything that's going on after a while since we're never presented with a consistent tone. One second the film is a goofy dark comedy, the next it's a psychological thriller. Eventually, you end up with a David Lynch-style what-the-hell-is-going-on-type of deal where reality and paranoia merge together into one incomprehensible question mark. Sadly, the film just doesn't grab you enough to warrant you sitting through a lot of this off-beat randomness. Which is strange because it has good characters, good performances, terrific visuals and cool ideas, it just fails to make all of them consistently interesting.

I would recommend checking out Brain Dead once, just because it does have its merits and, as a Roger Corman production, you'll always find stuff to enjoy there. But as a captivating piece of sci-fi horror, I just don't think it works as well as it should have or in the way that it should have.

Watch the other Braindead instead, if you can.