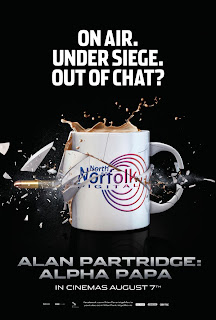 Whether you know about Alan Partridge or not, you've surely heard of Steve Coogan. Well, to give you an idea, Partridge is Coogan's Borat. He's a rude and awkwardly stuck-up talk show host/radio DJ who wears bad sweaters, lives in Norfolk, drives a Lexus and talks kinda funny. Oh, and everything he does tends to turn sour before crashing and burning in usually embarrassing turns of events.

So now all you uninitiated folks are roughly up to speed: on with the review.

In this big screen outing, we find the character working as a radio DJ in Norwich for a station which is undergoing a take over. When he learns that his job might be on the line, Partridge quickly jumps at the chance of saving his own ass and throws one of his colleagues under the bus. Colm Meaney's fired employee, Pat, doesn't take kindly to all that so one night he takes control of the radio station and holds several people hostage before demanding for Partridge to be his go-between with the police. It's a typical siege scenario but where you'd normally have a talented negotiator handling things you instead have Alan Partridge, a selfish, gutless idiot jerk completely clueless about how he should be handling a situation he's partly responsible for causing in the first place. The action throughout the film may be mostly limited to the radio station, which I felt, watching the trailers, might make the movie feel a bit too claustrophobic and stagy, but thankfully, the jokes keep coming at a steady pace and there's never a dull moment.

If you'd told me a year ago that I'd be sitting in the cinema having a better time watching the Alan Partridge movie than The Lone Ranger, I would have probably laughed in your face.

To be fair, not every joke works in Alpha Papa but Steve Coogan is so spot-on all the way through and there are so many jokes that do work that the film will hardly feel hit-and-miss. Visually, there's really no eye candy there save for a CGI seagull so maybe the big screen isn't a necessary setting to watch this movie. If you miss it in theatres, do check it out on DVD, though. Your enjoyment of the film will probably almost entirely depend on whether you're familiar with the character and whether you actually like the character. I'd probably recommend checking out some Partridge stuff beforehand just to get the gist of it all. The film itself, like I said, can be hit-and-miss, numerous quirky secondary characters are introduced but never become truly useful and there was probably a bigger story to tell with the character but as it stands, it's an enjoyable little Brit-com with some brilliant lines, some very funny visual gags and even a misguided Jason And The Argonauts reference.

What more do you want?

Do check out Alpha Papa if it sounds like something you might be interested in, otherwise, find yourself Partridge's back catalog, double check if you could potentially sit through a whole movie with this guy and pick up the flick when it comes out on DVD.

Just what the Partridge ordered.