A NIGHTMARE ON ELM STREET 4: THE DREAM MASTER - REVIEW 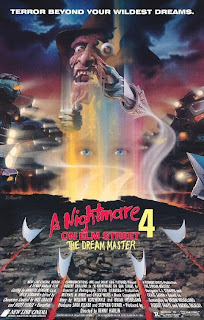 You'd think that by the fourth film in a horror franchise, things would have crash-landed long ago leaving but traces of a once decent concept. Yet after two, frankly not bad, sequels The Dream Master comes along and still does a decent enough job.

Annoyingly, it still seems like the franchise isn't quite sure about whose story it should follow. The first sequel seemed to be headed in a different way, then the third film brought back Heather Langenkamp from the first movie (opening up dozens of plot-holes in the process, by the way) and now, with The Dream Master, we follow a couple of characters introduced in Dream Warriors except they're played by different people (bye bye Patricia Arquette). Oh and Langenkamp isn't in it anymore. Yeah, that's not confusing at all! I hear that 3, 4 and 5 are essentially sequels to each other so I guess some consistency is on the horizon but it seems like a needlessly convoluted progress just to get to some sort of plot!

Luckily, with every film, the key components that made those movies fun in the first place are still there throughout: the dream sequences are increasingly creative, as are the special effects, each film is pretty darn dated in its own entertaining way and although things get more and more cartoonish and, by extension, less scary, Robert Englund's Freddy remains really entertaining and keeps the lols coming. The dream concept also introduces interesting ideas with every film, it's a shame it never truly delivers on those ideas, though, but it's all about the ride. I actually kinda liked the Scanners-style concept of Freddy transcending the dream world and using a human vessel to bring himself back to the real world brought forward by Freddy's Revenge. This is quickly shunned away, unfortunately. In The Dream Master, Freddy faces a young woman with the ability to bring people into her dreams and although he starts using that talent to his advantage, it soon becomes obvious that this very power might be the only way to defeat him for good.

The way Freddy is gotten rid of in this movie is about as ludicrous and anti-climactic as it was in the original A Nightmare On Elm Street. Thankfully, that whole scene is saved by what is easily Freddy's most glorious death scene thusfar: it's gross, slimy and gory as hell. It's hilarious and I love it. Great practical effects this time around again, I must say. Add to that a killer 80's soundtrack and some top-notch cheesy one-liners courtesy of Freddy himself and, once more, you've got yourself a fun little slasher that may not be scary but delivers in terms of lols, visuals and, less we forget: fun factor.

A Nightmare On Elm Street 4 may not be essential viewing and it's actually not quite as memorable as either of its predecessors but it's still an entertaining Freddy flick and should satisfy fans just enough to make them look forward to The Dream Child which, if it's half as silly as it sounds, could be pretty darn glorious.