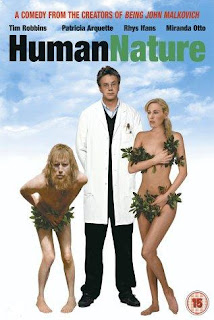 Years before Eternal Sunshine Of The Spotless Mind really put Michel Gondry on the map as one of the most creative and unique directors working today, he made Human Nature: a weirdo comedy starring Tim Robbins, Rhys Ifans and Patricia Arquette.

Gondry's first collaboration with genius oddball writer Charlie Kaufman really gels. Just like the latter's work with Spike Jonze on Being John Malkovitch, the off-beat visual style really compliments the off-beat writing. The result is a film which delights in being pretty out there. The plot sees a woman born with a condition that makes her extremely hairy meet a really uptight scientist who discovers a man raised by apes (or, rather, by a father who thinks he's an ape) and tries to teach him the finest things that society has to offer and make him abandon his every animal instinct. The film is partly a sort of parody of Greystoke: The Legend Of Tarzan mixed with some of the themes explored in greater detail in Adaptation. Human Nature is a lighter effort but a valid one: it's constantly random and kind of goofy but it's so sharp, clever and charming that it becomes pretty irresistible. It's a cute little movie with a decidedly twisted sense of humour, it cares about its characters regardless of how odious some of them might be but never forgets to ridicule them a bit when they deserve it.

It's a cartoonish tale with some cartoonish moments but Gondry's unique, inventive storytelling techniques coupled with Kaufman's brilliantly written characters help make the film consistently interesting. The whole cast does really well, Patricia Arquette giving an adorable, brave performance throughout, Rhys Ifans having the time of his life and Tim Robbins managing to turn a potentially moronic, unpleasant character into a likeable schmo. Also look out for Peter Dinklage who has a fun cameo appearance in this and Rosie Perez, who plays Arquette's friend.

Overall, Human Nature may not be the very best thing Michael Gondry or Charlie Kaufman have ever done but it deserves a bigger audience: it's a smart and very funny piece of cult quirkiness and one that certainly deserves a watch.