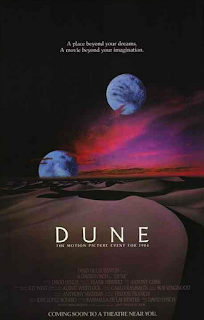 Adapting Frank Herbert's epic sci-fi novel Dune was never going to be easy. So what better choice to direct the epic undertaking but David Lynch, a filmmaker known at the time for directing a weird-ass little movie about a screaming human baby tadpole and something about a guy with elephant-like facial features...

Surely THE man for the job.

Now I'm not saying that picking Lynch to direct was a mistake, after all, who knew that Tim 'Pee-Wee's Big Adventure' Burton could pull off Batman? But if what the studios wanted was some kind of really commercial trilogy or a fast-paced, Star Wars-style action flick then they couldn't have made a weirder choice.

But I, for one, am happy they made it.

Now I know it's hardly regarded as Lynch's best work and it's never really listed along with the best novel-to-movie adaptations ever but... it's Dune! By David Lynch! Tell me how that's not all kinds of awesome. Oh sure the film's not perfect due to it being edited to death to fit into the studio's 2 hour maximum length, a lot of its effects are admittedly dated and it's so 80's you can almost see the legwarmers on those pesky sand worms.

This isn't a film you can judge like any run-of-the-mill sci-fi epic. Dune really is unique. Refusing to abide by most blockbuster screenwriting rules, it goes for a completely different type of style and although the film's odd choices are often criticised even to this day, I really love that it isn't just another Star Wars clone. You can tell Lynch really set out to create something unlike any other sci-fi epic before it and, in that sense, the film's a complete success. The fact you can hear every character's thoughts is usually quoted as a prime example of how not to adapt a novel but I think it gives the film an omnipresent, dream-like quality that works brilliantly with the rest of the film.

Dune is almost too well-made for its own good, in a way. The industrial, dark and dusty world Lynch creates really is impressive: it feels perfect and, in a lot of cases, looks amazing. That said, it is smoky, dark and dusty... pretty much the entire time making the film a moody affair to say the least. And because the story isn't exactly straight-forward and easy to hang onto from the offset (and told abstractly, of course) it all makes for a bit of a gloomy ride. That's not to say it's dull, although I could understand people saying it is, it's just not the typical, Hollywood space opera and if you can make it through the first WTF 20 minutes then the rest should be a doddle. You could say there's 3 movies in one here, battling it out. Not unlike the whole Arrakis conflict come to think of it...

David Lynch is Paul Atreides (Kyle MacLachlan), a young guy trying to make his people proud (or trying to make a movie in his very own style) but the evil Harkonnens (the studios) just want to take over and mess with what the people (Arakkians?) want (the good movie "melange"). So Lynch finally tames the sand worms (editors) and makes a difference to the sci-fi genre losing $10M (a LOT of spice) in the process but creating a cult classic (rain...?) which will eventually be widely recognised as... not such a bad thing.

Wow. I almost made that whole bullshit analogy work, didn't I?

But anyway, MacLachlan proves to be a great choice as ever, Patrick Stewart pops up here and there occasionally turning into big magic cubes, Max Von Sydow cameos instructing us about how to urinate in your desert armour, Sting stretches in a rubber diaper and Sean Young tries very hard to get involved but the editing sand worms are having none of it. It's an excellent, weird-ass cast. Watch out for a delightfully twitchy Brad Dourif as The Baron's assistant, Jurgen Prochnow as Paul's doomed father, the ever-cool Dean Stockwell, a cute David Lynch cameo and Virginia Madsen whom, I'm starting to realise, was in everything back in the day!

To please everybody, Dune should have either been a trilogy (or TV series) or it should have been directed by someone more blockbuster-friendly with a focus more on action and a faster pace altogether. I, for one, am very happy with what we got but you know how it is: if a film flops at the box-office, no matter how good it actually is, people are still gonna endlessly look for flaws. For the record, the following movies were flops: Blade Runner, Night Of The Hunter, Citizen Kane, The Wizard Of Oz, The Adventures Of Pluto Nash... ok never mind that last one. It's not too bad but where did all the money go?! Jeesh...

As it stands, though, I really enjoy Dune and it gets better with every watch. It's quite dense in places and a bit hard to follow at first but once you get into it, it's a lot of fun. Lynch clearly has a ball making the Harkonnens as repulsive as possible, you get to see a brain-gina fly over a cityscape and vomit planets in the sky and it includes some of the best worm riding you'll ever see. I should also mention Toto's awesome score which really helps make the film that little bit more special.

One for retro junkies, Lynch fans and those willing to put all nitpicking aside, sit back and bask in the epic epicness that is: Dune.