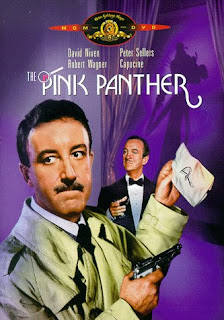 A long-time fan of Blake Edwards' iconic franchise, I grew up seeking out and watching every single Pink Panther film. Yes, even those wimpy Clouseau-less ones, that bizarre Roberto Benigni effort, the unofficial Alan Arkin spin-off and, more recently, the Steve Martin remakes...

It's been a tough road, to say the least.

Anyway, time to delve into my childhood's colon nice and deep to revisit one of my many cinematic obsessions.

The first Pink Panther film was never my favourite. For one thing, Peter Sellers' dim-witted inspector was nothing more than a side character while a majority of the film was spent with David Niven's cat burglar The Phantom, Claudia Cardinal's gobby Princess and a young Robert Wagner as The Phantom's nephew... oh and Clouseau's scheming, two-timing wife.

Too many main characters, you say?

Really this is my main complaint with this first instalment. A lot of it is fun but every so often it's bogged down by some ridiculously long and tedious scene which either involves Cardinal acting all cute and sexy (and boring) for aaaages or David Niven quietly walking around. Way too many things are happening and yet it never feels like anything is actually going on. I guess the film juggles between being some farce with about 20 quiproquos taking place every minute and being an actual whodunit or spoof.

Clouseau steals the show effortlessly even if he is confined to a bedroom 90% of the time: the precision and timing of the slapstick and jokes are perfect and make playful distractions to a story which could have done with a little less stalling and a little more genuine goofiness. It is the On Her Majesty's Secret Service of the series and feels more like a cozy, amusing holiday a-la To Catch A Thief rather than a full-on Pink Panther movie with its very own identity.

That said, I do enjoy watching it every so often, it looks fab and no one films a party like Blake Edwards: the combination of Henry Mancini's fantastic score, Edwards' own unique style, the brilliant art direction, the 60's charm of it all, an all star cast hanging around drinking, being suave and cool. It's frankly hard to resist in many ways.

Wait, wasn't there a cat burglar trying to steal the Pink Panther diamond at some point?

Not that a Pink Panther film should be particularly driven by its clever, enthralling, super intricate plot but there's a lack of focus here which really takes away from what's actually enjoyable about the franchise. It's like the film just gets bored with itself so decides to hang around with Niven or Wagner for a while until the end when shit actually goes down.

Like I said, this is hardly the definitive Pink Panther movie but it is enjoyable despite the odd stupidly long scene and it does contain short glimpses of genius things to come. Besides, it looks and sounds beautiful so purely on a superficial level it's well worth seeing.

Worth a peek if only to see Sellers at work in his first outing as Inspector Clouseau.

It's a start and not a bad one at that, just don't expect a laugh riot.