MY WEEK WITH MARILYN - REVIEW 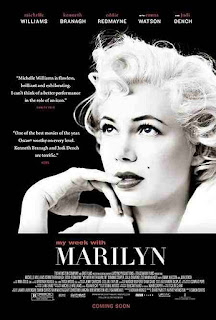 What makes a good biopic?

Yes, all of those, of course. But also a good biopic needs to tell us something new about the person being looked at. Otherwise, what are you left with besides people in funny disguises?

Not much it seems, as My Week With Marilyn clearly demonstrates.

From the offset it's clear that although there is a lot there story-wise to work with, the film will never even begin to scratch the surface of what's essentially the meat of the whole thing. Instead of focusing on Monroe's struggle to work in a film with Laurence Olivier, which could have had some dramatic potential, we instead follow the whole thing through the eyes of young Colin, some lucky-ass kid with no apparent personality, whose kinda-affair with the star is told through pretentious voice-overs, unlikely reconstructions and dialogs.

This is frankly awful.

From the very first shot, something feels off. The direction, the script, the grating voice-over: it all feels so amateurish. Almost like a film student went out and got some cheap actors to dress-up funny and make bad impressions of past Hollywood stars. Colin's whole introduction is tedious at best and his worries throughout the film never rise above mildly irritating. Are we meant to feel sorry for him because he's rich, he gets a job working for Olivier at the drop of a hat, sees Marilyn Monroe butt naked and kisses her several times? Or because she fucks off in the end? Was that really such a shock? I don't get why Colin or his story are worthy of mention.

The film is constantly clumsy and sports one of the least convincing casts I've seen in recent years. As decent an actress as Michelle Williams may be she is miscast here. Lets be honest: she looks nothing like Marilyn Monroe and the way she portrays her is simply... odd. The filmmakers seem convinced that they have found the perfect alternative to Monroe herself, the camera sucking in every pore of Williams' face when the truth of the matter is the impression is just never quite right. Williams is hardly to blame when a film is this clunkily written and altogether made though. Hell, Kurt Russell was more believable as Elvis Presley! Kenneth Branagh's Laurence Olivier is also a bit rubbish. Again, the actor's not really to blame although his voice is more reminiscent of Tony Curtis' cartoon Cary Grant impression in Some Like It Hot than the real thing. Basically giving Branagh a rubber dimpled chin is grotesque and makes him look plastic. Like a bad talking Laurence Olivier action figure with its batteries running out.

Only Judi Dench (Sybil Thorndike) and Julia Ormond (Vivien Leigh) come out of this with their dignities intact. The likes of Zoe Wanamaker, Derek Jacobi and a Norman Wisdom lookalike also feel about as necessary as Branagh's wax chin. The film tries to tick all the biopic boxes by being a kind of coming of age story as well as a study of a troubled iconic figure but fails on every account. It could be compared to 2009's Coco Chanel & Igor Stravinski in that both films focus on brief, blink-and-you'll-miss-'em moments in a celebrity's life but the Chanel film at least had a convincing cast, great music and stylish direction.

I really can't express how disappointing this effort is. Frankly, it's a lot of work to sit through: nothing happens and when it does it feels artificial and off. If you can give it a miss, do. This is a film which never feels urgent, necessary or informative. Its depiction of the setting and time period is particularly hard to swallow and although everybody in it is giving their best it simply doesn't work.

Just watch ANY Marilyn Monroe film instead, I guarantee they'll outdo this forgettable mess in every way. Yes, even The Prince And The Showgirl.