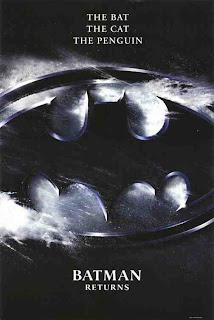 For a long time, Batman Returns was not only hands down my favourite Batman film but one of my all-time favourites. To a certain extent, this is still true but time has made me a harsher critic so here's me trying to objectively review a film which has been firmly embedded in my DNA for decades. Hell, I could even hum the entire score from start to finish if I was drunk enough!

Where Batman took the film noir route and was firmly inspired by detective flicks of the 40's, Batman Returns is pure Tim Burton. The snow, the quirky fairytale feel, the gothic look, the twisted sense of humour... it's a very different Gotham City to the one we were first introduced to. The film almost feels like an opera with the town hall, where most of the action takes place, acting as a kind of grand stage where all the drama and madness can take place.

The film's opening is one of my personal favourite sequences of any movie. We are introduced to the Penguin character through a beautiful marriage of Danny Elfman's eerie, wonderfully chilling score, Burton's Citizen Kane-style models & sets, Paul Rubens (Pee-Wee Herman), a deformed evil cat-killing penguin kid and the tragic murder of a kid by his own parents. Dark, tragic, stylish, funny, random, chilling, beautiful: I could watch that whole pre-credits sequence over and over.

We're soon introduced to a now grown-up Penguin and boy is he foul. Danny DeVito is virtually unrecognisable and clearly enjoys being about as monstrous, gross and disgusting as possible. It's his finest moment on film to date and one couldn't imagine any other actor outdoing this interpretation of the character. He IS The Penguin. Similarly, Michelle Pfeiffer is our Catwoman here and, once again, is about as perfect as the character could possibly ever get. Sexy, dangerous, tough, mysterious, freakin' insane: one viewing is enough to delete the words Halle and Berry from your mind. She is THAT good.

A third side-villain is introduced in the shape of Max Schreck (Christopher Walken) and altogether these bad guys provide each side of Bruce Wayne's personality: the monster, the vigilante, the businessman. In a really messed-up way, Batman kinda has to fight himself in order to understand why he does what he does and come to terms with his multi-function lifestyle.

Michael Keaton is back as the Dark Knight and yes, he easily remains my favourite Batman to this day. It's true the man hardly screams superhero at first glance but that's what makes him so good: he's a normal guy, not a body-building ninja trained by monks on top of a mountain! A normal guy with shitloads of dough and one hell of a cool voice. The reason Returns works on an emotional level is because Wayne can in fact relate to The Penguin in that they are both monsters born out of a cruel past. There is a sense that The Penguin's bitterness is justified and therefore in the end you do feel bad for the guy, no matter how evil, crazy and repulsive he is.

The film has been much criticised for being all about the villains but really, when you look at what each of them represent for the hero you'll find it's all about The Bat, regardless of how much screen time is actually offered to him. My only criticisms are nothing but nitpicks so don't expect any big statements! Although some of the effects still work remarkably well, the film has dated quite a bit and those fake penguins look, well, fake. The scale also feels a tad lower than i actually recall due to 90% of the action being confined to the town hall. One would have liked to see more of Gotham. Furthermore, the script has one too many puns I'm sure but at least they're funny, for the most part! You'll find none of that Mr Freeze rubbish. But yeah, obvious models/fake penguins and such little hiccups do take away some of the film's magic but what are you gonna do?

It's just a great movie.

To date, it is for me THE most underrated Batman film and remains one of my personal faves.

Plastic penguins and all.

If you haven't already: see it!  It's weird, it's random, it ends in a penguin rocket battle but it's all Burton's.