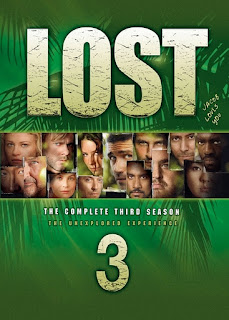 Now this is what I'm talking about!

After a frankly dull first season and an uneven (if promising) second here we finally have a focused, genuinely well-made, wholly entertaining season which benefits from being a little darker and a little less all about that boring old beach we've grown so accustomed to!

Again, a lot of the wrongs of season 1 are put right and now the show finally finds itself with not only a great villain, dodgy "Other" leader Benjamin Linus, but interesting main characters you actually do care about (...and Kate). Everyone's backstories are fleshed out a bit more and interlinked with each other in clever ways, characters face real conflicts and have an immediate purpose. This time, these guys are shown no mercy.

Long gone are the days when Charlie would worry about peanut butter, long gone are the boring "lets-all-sit-around!" episodes: no, this is the season where the smoke monster starts kickin' ass, this is the season where Jack starts losing his can-do confidence and, most importantly, this is the season where Desmond proves to be way more magical than previously estimated. There are some duds with the Nikki and Paulo episode feeling ever-so-slightly pointless and details like Desmond being a monk for a while not particularly having any impact on anything. That said, for the first time since the start of the series you do feel like it's all building up to something rather than it all being made up as it goes along.

I mean, some of it blatantly is but still...

Season 3 interestingly separates our characters into different groups and this, it turns out, works remarkably well. New dynamics are created, new unlikely friendships, new enemies: anything new and different, at this point in the game, is good. It all builds up to a terrific, nail-biting conclusion with many surprises, some answers, more questions and sacrifices. This is the closest that Lost has come to being actually great and it sure leaves you thirsting for season 4.

Overall, this is Lost's best effort yet. It makes great use of its characters, its setting and its antagonists to create one entertaining, intense season. Oh, and you can finally say goodbye to those blasted flashbacks!

Will they ever get off the island?

Will Hurley ever lose weight?

Will Locke ever admit to being Jesus?