THE ADVENTURES OF TINTIN - REVIEW 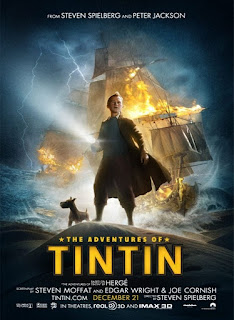 Growing up in France I was pretty much pre-programmed as a Tintin fanatic from the start. Owner of all the books (yes, even the infamously racist one), proud addict of the animated series and devout follower of all things Tintin, the prospect of a film based on Herge's comics directed by Steven Spielberg was a pretty exciting one to say the least.

Looking forward to a full-on live action Tintin film, the announcement that the whole thing would be motion-captured was a tad disappointing. I mean, there hasn't been a good live action Tintin flick since 1961's Tintin And The Mystery Of The Golden Fleece: it felt right. But an animation? How could it ever measure up to the TV series or even the 1972 animated feature Tintin And The Lake Of Sharks?

I guess the idea was to stay true to Herge's designs (...by changing them?) but the cartoons did that pretty well so that sounded like a bit of a redundant move. Like Superman Returns being a homage to a franchise which already had 4 films attached to it. Why?

I still don't get it.

Oh well, here we have The Adventures Of Tintin: animated, motion-captured, 3D, with a cherry on top. How does it fare?

That's really all I can say without sounding like a whiny, nitpicking fanboy.

Then again, that's what I am so here goes:

It should have been live action.

Don't get me wrong: the film looks great. Visually: every setting, every background, every detail is perfectly crafted and, especially during the action scenes, it all looks phenomenal... but there's still something missing. The characters just don't look and feel right. Thinking about it now, the idea of taking cartoon characters as they are and just adding human skin and tiny eyeballs is rather strange. What you're left with is a grotesque hybrid of not-quite-human, not-quite-cartoony...things and that's simply distracting. An Incredibles-style look would have probably worked better.

That or, you know, humans?

The character design is uneven to say the least. The likes of Saccharine and Haddock look fantastic but others range from video-gamy (Castafiore) to kinda squashed (Allan) to a tad scary-lookin' (Thompsons). These CGI "bodies" are so oddly proportioned that even their movements feel floaty, like gravity has changed its rules somehow. And that's not even the Moon one! Well, at least we know the third film will work, gravity-wise.

The film does have a lot of heart and a lot of clever little witty moments (the Herge cameo, the Jaws reference) with some truly great action sequences: the Bagghar chase is insane but ridiculously fun. Story-wise though the film ends rather strangely with the second part of that particular story left out entirely (no mechanical shark submarine?) and a last minute action-packed final fight which comes in way too soon after the thrilling aforementioned chase. A bit too long is spent on Haddock's flashback making the ending feel just a bit rushed.

I wanted to see the mechanical shark-marine!!!

But that's just me being unreasonable. I'll wait until part 2.

The voice cast does a decent job with Andy Serkis excelling as Haddock, easily the most accomplished character (who steals the show). Daniel Craig makes a great villain, the Simon Pegg/Nick Frost duo is hit-and-miss as the...rather hit-and-miss Thompson twins and Jamie Bell makes an Ok Tintin although his London accent, for a Frenchie like I, feels a bit strange linked to the naturally French-speaking character as it does with most of the other accents spread throughout the film.

On the whole, The Secret Of The Unicorn is an incredibly entertaining, partly stunning achievement. On the other hand, it is a missed opportunity to tell a Tintin story as it should be told and the film is crippled by its technology and its effects which will feel dated pretty soon I suspect. Spielberg does an amazing job during the action sequences but he doesn't feel wholly comfortable with the motion-capture technique: again, the film begs to be an Indiana Jones-style live action adventure.

It's fine: Tintin fans will be happy and grumpy in equal amounts, newcomers should enjoy it on the whole and be tempted to look into more Tintin-related outings...

It could have been incredible.