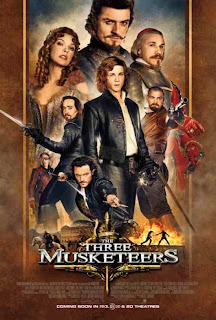 Ok people. Brace yourselves. You might want to be sitting down for this.
Here goes.
*exhales*
Paul W.S. Anderson's The Three Musketeers is nothing like Alexandre Dumas' original novel.
THERE. I said it.
Oh sure you've got the main plot points intact: Milady rock-sliding under an Indiana Jones booby trap, The Duke Of Buckingham's evil flying boats, razor beams...
Wait...
Here's the deal: I have nothing against an over-the-top version of the musketeers, I still have my Gene Kelly 1948 version and I'm happy with that one. Steampunk Three Musketeers? Why the fuck not? Everything else exists. BUT...
(and this is a big BUT)
Make it good.
I'll admit a lot of this Three Musketeers made me laugh. The film bears that special kind of stupidity that's just about silly enough to be funny. Take the very last shot of the film (which opens the path for a sequel btw):
CUT TO:
Boats.
(Tilt up to the sky to reveal...)
Boats.
CUT TO: BLACK
Wow.
Something this dumb should have been way more enjoyable. I would suggest a further tilt down to reveal underwater submarine boats. See, that shit writes itself! I mean, if you're gonna go all out why not Wild Wild West the hell out of it? Surely D'Artagnan must have a cyborg twin in there somewhere!
And the Cardinal?
Space puppet from another galaxy/dimension/space?
Incidentally, what the film finds funny is not. James Corden's Planchet, an attempt at comic relief, is a plague throughout the film and is about as funny as twisting a sword through your own urethra. W.S. Anderson is also very proud, as ever, of Milla Jovovich's sexyculous antics: jumping off castles, jumping off flying boats...
Did I mention this film had flying boats?
Yes, Orlando Bloom's camptastic Duke Of Buckingham is inexplicably evil in this and is planning a full-on war with an army of flying hot-air balloon boats. Why? Because this is a live-action cartoon, that's why. Also, Athos, Porthos and Aramis are ninjas and the king of France is 12 years old.
So to recap: some of the film's OTT silliness admittedly works (on a very, very guilty pleasure level) but most of it doesn't. The film knows it's silly and wants to go all out and yet it still believes in its own cool, stylish badassness. It THINKS it's being clever!
*gasp*
Ok, you have Christoph Waltz and Mads Mikkelsen in your film, two of the best humans alive, as some of the best literary villains out there but James Corden, the guy from Lesbian Vampire Killers (Ughnnnnn) gets more lines and probably more screentime. And you think you're being clever?!
*patronising nods*
Sure.
Hey, you know what's great?
The novel.
Read it.
...
Flying boats...