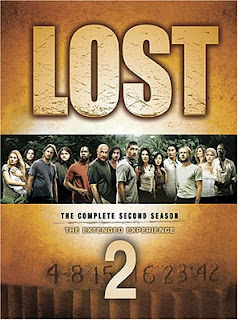 Those familiar with my less-than-glowing review of Lost's first season already know my stance on that snooze fest.

Whoop-dee-freakin'-doo! We're looking down a hole! That was TOTALLY worth a million episodes!

Anyway, onto Season 2 and, you know what? I have to hand it to the show: it learns from its mistakes. A heck of a lot of my criticisms are tended to in a superior second season which not only has an awesome subplot (which amazingly does deliver!) and things actually happening (almost) every episode but it introduces two of the show's best ever characters and disposes of some unwelcome cast members.

It all begins in the "hatch" found at the end of the first season and although not nearly enough is done with the whole subplot that goes with it, it provides a new equilibrium for our colorful crew of troubled assholes with good hearts to struggle with. A lot of time is spent introducing the Anna-Lucia character, played by notorious tough-cookie Michelle Rodriguez, and we get a peek into a side of the island we had never seen before. Sadly, Anna-Lucia proves to be too dislikable a character to really get behind or care about. That said, her one encounter with *shudder* Shannon almost made me so happy I got "lost" in my own cream.

A new welcome addition though comes in the shape of Desmond, a Scottish fella who was running the hatch before the douche bag academy showed up. He brings a well-needed energy to the group and although he bolts early on, he is missed until his inevitable, pretty great return. Quiet but deadly druglord-turned-believer Mr Eko is also a cool addition but it's when mysterious potential "Other" Henry, claiming to have come to the island in a smiley-faced hot-air balloon (lol), shows up that things really get interesting. The shit pretty much hits the fan and this all leads to a surprisingly satisfying finale which introduces us to one of THE best villains in television history. So... yeah, stay tuned.

Now don't get me wrong: Lost Season 2 is far from perfect. Yes it is miles better and way more entertaining than Season 1 but it's still very hard to warm up to all these characters (all 60 of 'em) which still feel way too bland and plentiful. That said, the finale does promise a lot of changes in the next season so we'll see how that develops. It'll be a long climb to greatness but hopefully Lost will keep working towards bettering itself and achieve some kind of TV nirvana.

I highly doubt that'll actually happen but stranger things have.

Like remember that time a polar bear just showed up?