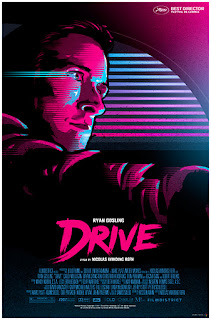 For fans of sleazy 80's thrillers, the first 20 minutes of Drive are pretty much the most cream-worthy 20 minutes spent watching a movie for a very long time. Everything is simply perfect: the pace, the look, the tension, the music... it's so good in fact that the rest of the film in comparison is just disappointing.

Now don't get me wrong, I wasn't disappointed by Drive: it's very good. I was only disappointed that it wasn't amazing, which it so very closely was. That is, until Carey Mulligan shows up.

Understand I have nothing against the actress (besides the fact she's famous and I'm not quite sure why), It's just the character she's been assigned and the way the plot just takes that character for granted feels like a lazy touch in an otherwise spot-on flick. I don't buy that she'd willingly be with Oscar Isaac's character, I don't buy that Gosling's character would jump into such a life-threatening clusterfuck just for her. She has no personality, she's not interesting and shares about 5 words with Gosling before the man willingly lays his own life down on the line.

So much could have been done with that character.

On the plus side, Ryan Gosling is awesome. Never thought I'd say that out loud but yes, he really is. It's a great character and he plays him to perfection. Hell, the guy makes Kurt Russell's Stuntman Mike look like a dumbass kid! Speaking of Death Proof, for a long time Drive is pretty much what I wanted QT's film to be: one badass dude in a cool car going around kicking ass. It's pretty great.

The film itself is stylish, looks great and does an excellent job of building up tension. The retro score is simply glorious and whatever action/chase scenes there are, they are done without CGI and feel absolutely perfect. It's a great ride but you do wish they hadn't taken themselves so seriously. Could have done with a bit of Robert Rodriguez-style silliness here and there. I mean, this is meant to be a cheesy, sleazy, steeped in the 80's thriller but somehow we don't get a gratuitous sex scene with a saxophone-led music theme?

This is where Drive loses me a bit.

I think it wanted to be that kind of film but also more than that. It wanted to be an arty, deep thriller on top of it. Unfortunately it needed a fuller script to do that. I'm all for the cliches and Drive uses them brilliantly but it's not quite consistent or fleshed-out enough to make the more subtle moments work. There are way too many slo-mo shots, the relationship with Mulligan's character is more implied than seen (not in a good way) and you just don't get to really know anyone throughout. Which is a shame because in the end it's just hard to root for anyone or care about the outcome.

On the whole, Drive is a great movie and Ryan Gosling gives an iconic performance but it falls just short of true greatness. Too smooth and self-important for its own good, Drive needed to be dirtier, trashier and, ultimately, more self-aware. It's one of the better films of this year though and I would definitely recommend it. The first 20 minutes alone are worth it.