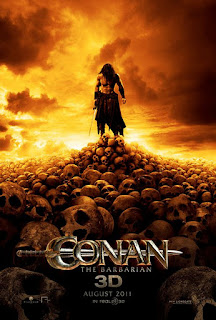 Making a film called Conan The Barbarian and not expect people to compare and contrast it with...Conan The Barbarian is pretty dumb. Actually, a remake/reboot at this point really makes very little sense. Hell, if you're going to remake anything remake Conan The Destroyer or Red Sonja! But oh well, we're here now and we'll just have to deal with it.

This time around Jason Momoa (he was in Baywatch) is our favourite barbarian and although physically the guy looks the part he's got about as much charisma as a cardboard cutout. Granted Arnold Schwarzenegger's performance in the original Conan was not exactly Oscar-worthy but it worked and Arnie had enough badass charm to make Conan feel like Conan and not just some blank generic action movie drone.

And what a blank, generic action movie this remake is.

The film lost me early on as we are led by a Morgan Freeman voice-over (penguins not included) into Conan's mum's uterus where baby foetus Conan is resting peacefully before being brutally (and literally) born on the battlefield. Ron Perlman's daddy Conan lifts his CGI/plastic baby child to the sky and roars.

Yeah, that happens a lot.

*lifts pencil to the sky and roars*

Yes, here we have yet another origin story and of course it's completely different to the original. The remake spends a good 20 minutes painstakingly reiterating a lame version of the original film's awesome first 5 minutes (better than the entire remake itself btw) and what comes next is both generic and dull.

The original had a unique atmosphere: the dusty, rough world Conan lived in felt cruel, rough and authentic. Here, with endless colourful matte paintings for backgrounds, endless below-par CGI and no sign of Basil Poledouris' classic score it all feels so artificial and squeaky clean you'll be throwing popcorn at the screen hoping to add grain to the film itself. There are some enjoyably hammy moments courtesy of Rose McGowan's psychotic (incestuous?) witch and Stephen Lang's bad guy but on the whole this is instantly forgettable and a lot of work to sit through.

Continue the Conan series? Fine. Reboot Conan? Uhuh, fine. Just put some effort into it. Think back to what worked in the original...and use that!

Now I'm being harsh but after the likes of Destroyer (silly), Sonja (yawn) and the Legendary Conan TV Series (fail) I was indeed looking forward to seeing a good Conan flick. Sadly, this is not it. And seeing as it flopped rather hard at the box office and got a good panning from critics all around it looks unlikely that the character will see the light of day once again any time soon.

*holds balls to the sky and roars*

Overall: dull, uninspired and frankly badly made all around, this is one Conan movie that should be made to push big wooden wheels for 10 years. Yes it has some watchable gore and ham here and there but that's just not enough to sustain an entire film.